Share All sharing options for: Streak ends in Calgary

No no, not this streak. 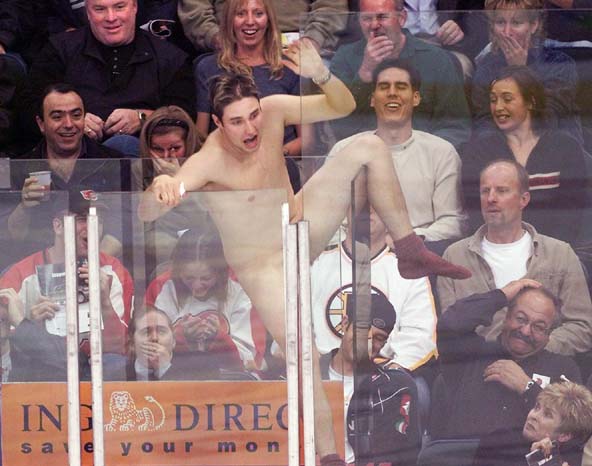 The mighty Ducks finally lost, their 16-game point streak killed by the Kipper and his stifling Flames. 19 seconds of suck surrounded by 59:41 of pretty tight play.

As an aside, I'm really surprised Ilya Bryzgalov has only had 5 starts thus far this year--given his gaudy playoff numbers, I would have guessed a lot more regular rotation, a la San Jose's Evgesa Toskbakov or L.A.'s Datthieu Clouron.

It's not like Ilya has been that disappointing. He's won 3 of those 5 starts, surrendering a total of 3 goals (granted, against Chicago and Phoenix twice). The other two games Coach Carlyle has yanked the crazy Russian after allowing but 2 goals against Dallas and 2 goals against Calgary. Even after surrendering 2 goals on 3 shots in the first period tonight (neither of which were terrible, by the way), he still walks away with a 1.84 GAA and a .924 sv%, some pretty strong numbers.

Not much leash for Breezy, it seems, but it allows him to pursue another asterisked Duck record: consecutive games surrendering 2 goals or less.

Methinks Calgary is getting its groove back. Well, at least the guy that matters.