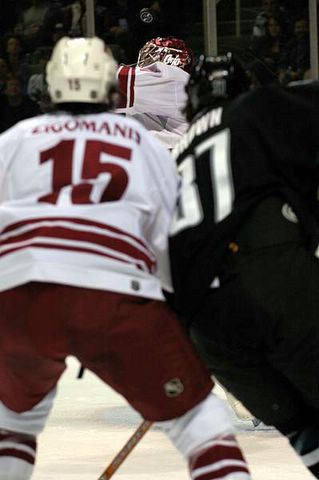 The Phoenix Coyotes ran up a 2-0 lead over the Sharks on Thursday night on the strength of 2 power play goals by Oleg Saprykin and Shane Doan. San Jose tightened up defensively after the poor start and worked its way back into the game.

It looked like both teams were playing out the string for overtime in the third period until Yanic Perreault scored the game winning goal with under a minute remaining. The former faceoff specialist picked up his 11th goal of the season to lead all Coyotes in scoring.

Trade rumors are swirling around Phoenix, spurred in part by this article in the Arizona Republic. David Vest reports that Mike Comrie, Shane Doan, and Ladislav Nagy could be available for the right offer. The return of defenseman Ed Jovanovski and Nick Boynton from injury will add more rumors to the mix.

The photo above is of Curtis Joseph making a painful off the mask save. A recap and photo gallery from the Sharks-Coyotes game is available here.