The Capitals come in on an impressive 4 game win streak, made all the more impressive given the opposition—at Tampa Bay, then hosting Dallas, Buffalo, and Ottawa. The Caps outscored that fearsome foursome 22-11, despite being outshot 108-155.

Last year, my brother and I went to the once-in-three-year visit of the Caps at the Pond, where Alexander Ovechkin potted his first NHL hat trick, including the OT winner. That kid worked us over that night, so probably Pronger will get the AOssignment tonight.

Two months ago, Japer’s Rink randomly took a shot at ‘Christie Prongley’ and I never quite understood why. A Caps fan jumping in on this bash-Pronger movement? Well, JP, here’s some Pronger news for ya:

Pronger is second in the western conference in overall scoring, only trailing teammate Selanne. He’s got 31 points, same as Omunchkin, and has gone without a point only three times in the last twenty games. Pronger leads the Ducks in even-strength ice time, power-play ice time, and penalty-kill ice time, and has been on the ice for 62 goals-for, 26 goals-against.

Plus Pronger can throw a baseball without making a Skeletor face. 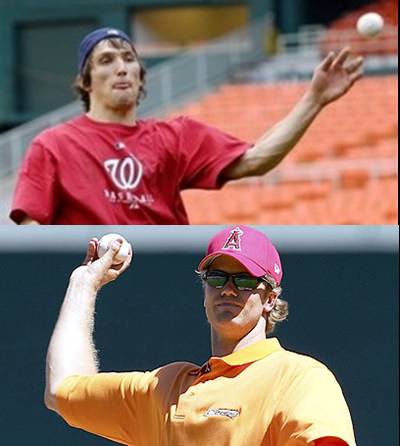 No wonder that kid fired his agent.

CapsChick has a nice game preview, including nicknames for all the Ducks. Check out her linky bar for lots more Cap bloggers, all desperately trying to be adopted by Ted Leon$i$.