Ducks-Stars: Tales from the Penalty Box

Share All sharing options for: Ducks-Stars: Tales from the Penalty Box

Well, as I mentioned in the GDP, I somehow snagged the Row B tickets to the Dallas game on Wednesday, and it was a blast. Now normally I bring my pal Damndaze along, (even though he’s a Red Wings fan) because he loves taking pictures from up close. However, Damndaze was out of town on business, and I had to take my own damn photos.

Now, I’m not real dedicated to photography or anything, especially when I’ve had some beers. Damndaze goes to a game and takes like 300 photos (a lot of them garbage-smudge, though); at the end of this game I think I had taken 16 shots (a couple of them garbage-smudge also). Most of the time the camera stays inaccessibly in my pocket, so I can safely drink my beer and still bang the glass if necessary.

Nevertheless, I did get some shots of some penalized Ducks. (Side gripe: this is my fourth game of five this season/preseason, and Chris Pronger refuses to take any damn penalties.) 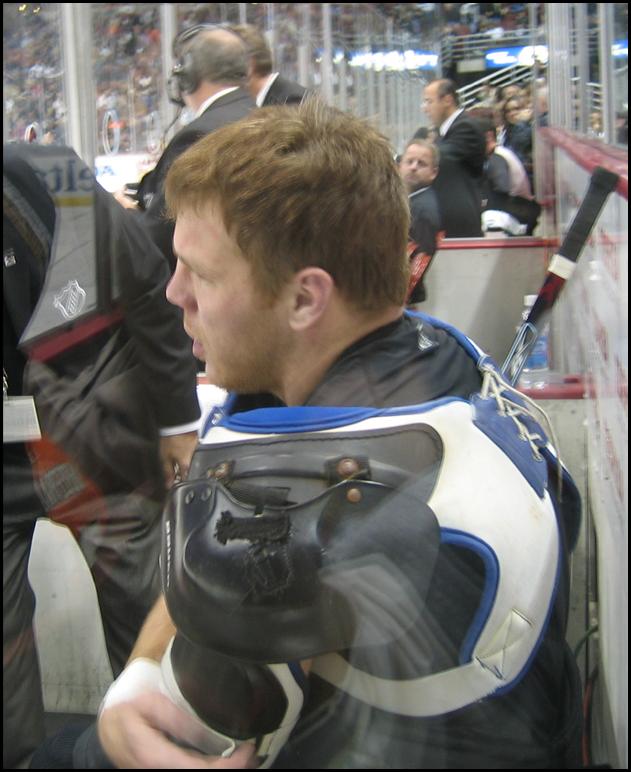 OK, easily the best part of this game was the 90-second beating of metapest Matthew Barnaby, courtesy of the wicked fists of Shawn Thornton. It was a drawn-out yet one-sided affair that deep-down felt really good; it’s nice every once in a while when a big yapper-pest gets the beatdown he’s had coming to him for the better part of his career. I mean, it wasn’t knock-you-out decisive, but still Thornton pretty much made him his Barnabitch. And I tell ya, the Honda Center crowd was pretty damn pleased.

Once in the box, Thornton proceeded to reassemble his playing gear while still talking it up with the persistent (I’ll give him that) Barnaby. It was pretty amusing for all of us to watch. Anyway, awesome work, Shawn. 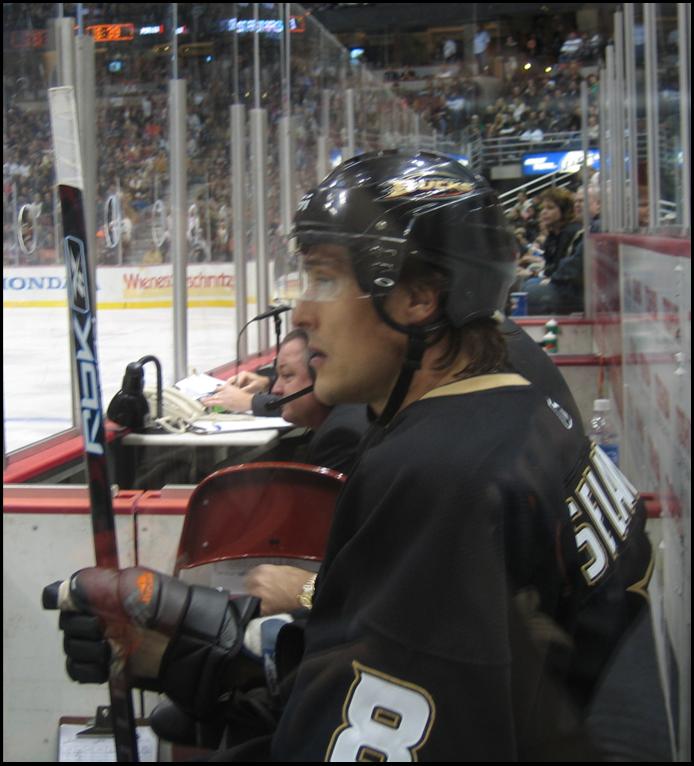 The next two penalties were both taken by Teemu Selanne, who suspiciously enough had been quoted that morning in the OC Register, saying: "I don’t want Lady Byng. Burkie would probably trade me if I won Lady Byng."

Any way, Teemu showed up both times pleading his innocence, and I managed only one good shot out of both visits. I yelled "Go get 'em, Teemu!" in the closing seconds of each penalty, with the exuberance only a beer-drinker can muster. 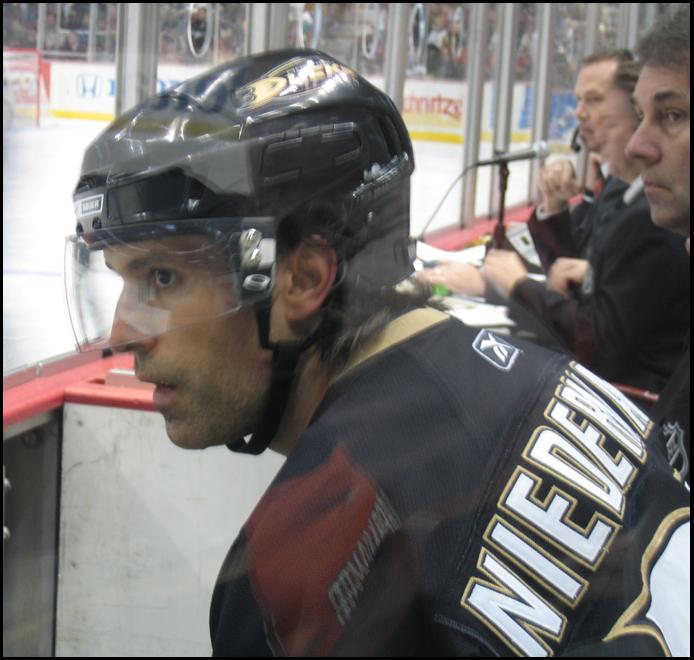 In the third period, I got another rare visitor, Cap’n Niedermayer, for another minor. I tell ya, I was really struck by the intensity sitting next to that guy. I know that’s an overused word, but Scott intensely watched the Ducks kill his penalty. It was like he was memorizing it or something, kinda kreepy, actually. 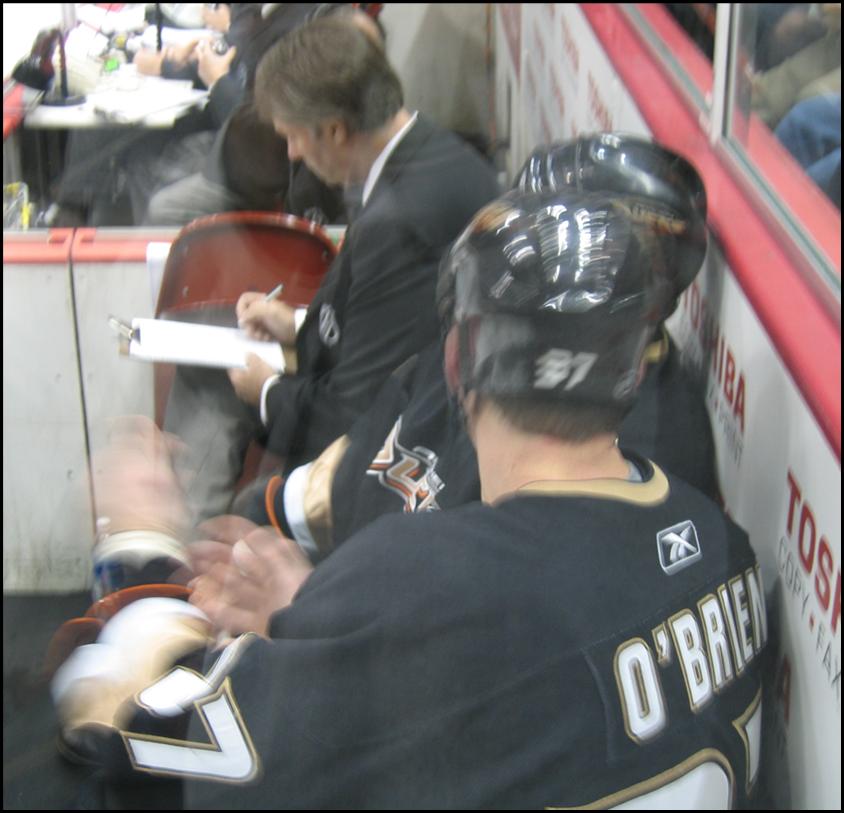 Later in the third period, both Shawn Thornton and Shane O’Brien took coincidental minors for double-roughing Barnaby (again), and Shawn spent the entire time re-enacting the earlier bout for Shane’s amusement, giving him a blow-by-blow account. It was pretty cool to watch, those guys were having a good time that night.

In this shot, he is showing O’B how to move his hands faster than a digital camera’s default shutter speed in the hands of a drunken techno-idiot. You know, the kind of idiot who can't even frame well enough to get even one guy's face in the damn shot.

Oh yeah, and outside the penalty box, Ducks won the game as well. Goals by Capt. Niedermayer, Pronger, and two by Corey Perry--on a night when Moustache was scratched, of course.

27-4-6 means 60 points (!) for the Ducks, with still two more shopping days until Christmas. One year ago today, Anaheim had 38 points, while Ottawa and Detroit led the league with 51 points.

What’s the phrase I’m looking for? Oh yeah, Holy Christ Shit Moly Smokes! Sure there's bound to be downturns at some time, but for now the outlook is cautiously awesome.

Hope you like the photos, and have a good holiday weekend, readers-who-only-read-blogs-when-they’re-at-the-office!