Mathieu Groin pulls his Garon, or something like that 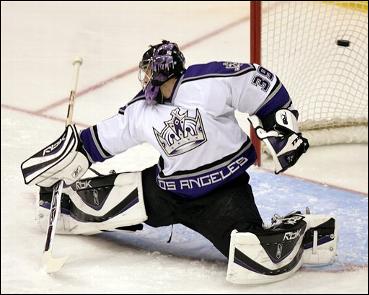 I don’t really have to emphasize too much the importance of quality goaltending in ice hockey, but maybe my neighborhood L.A. Kings could use a quick primer.

When news broke this week that goalie Mathieu Garon had injured his groin in practice, I chuckled at the thought of the die-hard Kings fan, cursing the heavens and saying "please not THAT groin!" You see, coach Marc Crawford has been ever-so-stubborn about platooning his goaltenders, despite the huge disparity of play (a disparity so wide, I believe it is visible from space).

Here’s a quick look at what I’m talking about:

How far apart is this? Well, if Cloutier (pictured above in his classic pose) wanted to match Garon’s GAA and sv%, he would need to stop the next 164 shots-on-goal over the next 376 minutes (more than six regulations!). Cloutier in 16 appearances has only 3 games where he stopped 90% of the shots he faced.

The Kings need quality goaltending badly, and they certainly are not getting it from Dan Cloutier (the worst goalie in the world, now with a two-year extension!). Now Garon is hurt, and the Kings are prepping for a home-and-home with their neighborhood bully Anaheim Ducks.

In related news, I'm having real trouble getting this ear-to-ear grin off my face. Go get 'em, Ducks.