Share All sharing options for: Moustached! The Parros-Perry Effect

You know, I’m starting to come around to George Parros (awesome graphic to the left stolen from HF Boards). Not in the sense that Moustache is doing anything well on the ice, but gosh, that pornstache is a pretty cool calling card. Plus, it's tough to be that critical when the team's winning like crazy.

Still, I am worried: through 13 games Moustache has pretty much stopped production on the Corey Perry-Ryan Getzlaf line, which Vic Ferrari notes play the softest minutes in the league (actually, he is referencing a metric at the new Behind the Net stats site, which to my eye looks excellent). This type of matchup is really sort of unfair, of course; Getzlaf and Perry are way too talented for third-string defenders, and their early production numbers show it.

But that was then and this is now. Now, instead of teaming up with a fighter-who-can-play, Perry and Getzlaf get to carry around a moustache-who-cannot. This was even more evident this week when Perry scored three points against FLA—on the one day Moustache was scratched.

Here’s some even-strength statistics for Perry, separating out the time he spent playing with and without Parros Nation. I focus on Perry here because Getzlaf’s slump has been less noticeable—he too has stopped producing in Parros minutes, but he steals time and points on other lines. Note also that the "No Moustache" minutes generally means playing with Fedoruk or Thornton instead of Parros (not Selanne or anything).
Basically, without Parros Corey Perry is able to produce even-strength goals at a rate similar to Andy McDonald (2.5 pts/hr and 1.6 +/- /hr). With Parros? Not so much.

Oh, and see that one Perry goal that Moustache was on the ice for? Parros was never within one zone of the puck on that play. 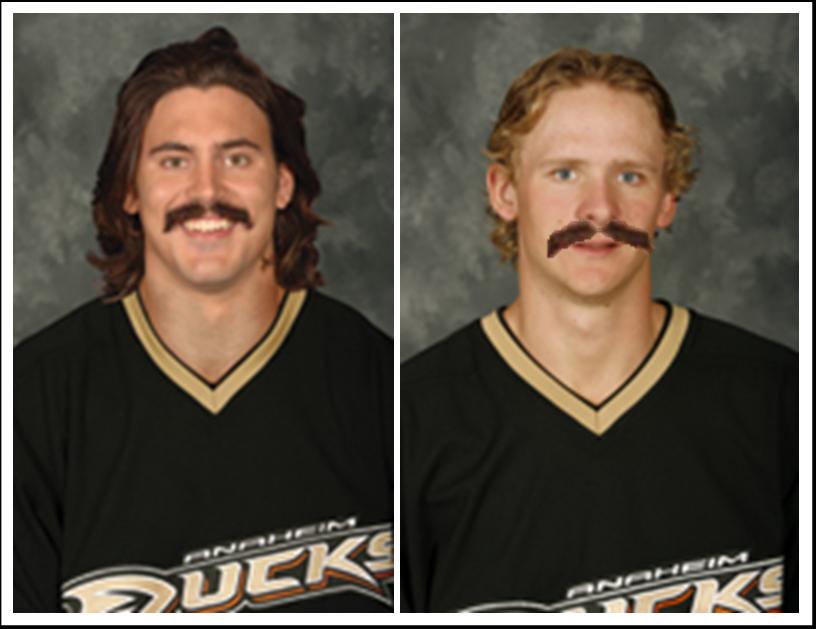 This is not to say that Parros serves no purpose; he will fight the big boys and allows Perry to be a snarky lad in the offensive zone. And with Parros canceling out the other team’s heavyweight, that allows middleweights like Thornton, Moen, and O’Brien to fight opponents more down in their weight class; Thornton and Moen definitely kicked some ass in Washington once Brashear was out of the way. Putting Parros in the lineup definitely comes at a cost, however, as Anaheim is now getting zero production from the easiest minutes in the game.

For reference, Todd Fedoruk in 75 minutes had 3 assists and was a +2. Shawn Thornton got 58 minutes in his first call-up, and had 2 assists and was a +5. If Parros could just find it within his moustached-heart to just not be useless, then maybe we can have the best of both worlds, just like before—production and protection.

You can do it, Moustache! Be useful!

(For more hard-hitting Ducks analysis, be sure to check out Tapeleg's take at JAHL.)