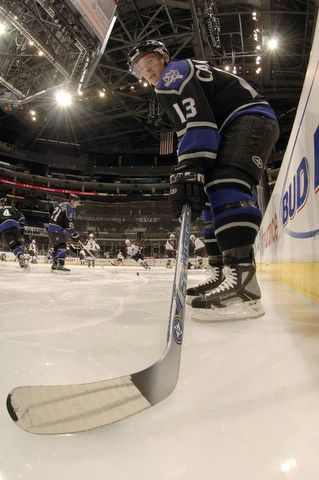 Found a new Kings blog via LetsgoKings.com. Take a look at Insidesocal's Life in Hockeywood. Hope the rain gives you a nice break from the smog SoCal.

From Steven Ovadia of Puck Update (someone draft him for Battle of California), the New York Times discovered hockey in California.

Hockey Fanatics in a Land of Palm Trees - Mark Pargas.

When Dave and I worked together at a newspaper in Southern California, we got through our shifts by talking about the Los Angeles Kings, our favorite team. In the dead of winter, we ignored the bitter warmth outside by focusing on a game played with ice skates and a frozen rubber disk.

We took turns taking shots at each other with a tennis ball, using an editorial writer's glass wall as a goal. We enlisted our colleagues in a fantasy hockey league. We did everything we could to make them want to switch the channel on the office TV set from the U.C.L.A. Bruins, or the U.S.C. Trojans, or "Caddyshack," to the big game between the Winnipeg Jets and the Hartford Whalers.

We had some modest success. But there were a few skeptics. Like Steve, who loudly declared to the office that he was the Antipuck. But even he began to crack. He started quoting lines from the movie "Slap Shot," talking about "feeling shame" and "putting on the foil." Once he even announced a Luc Robitaille goal to the newsroom by placing his hands around his mouth to recreate the voice of Darth Vader: "LUUUUUC" he intoned. "Come to the dark side, LUUUUUUUUC." There was hope for the Antipuck.