Share All sharing options for: NHL Baloney Award of the Week forgets Teemu

I hate myself for being this petty, but NHL.com, as part of its "Hype Thyself" campaign, has once again come out with its Players of the Week, chosen by some east-coast guy with an early bedtime. This week Mr. Bedtime put together a 3-man listing of Brodeur (3 wins, 2 GA), Lecavalier (4g, 3a in 3 games), and Ovechkin (1g, 6a in 3 games).

For those that are keeping track at home, that means of the 27 weekly awards given out thus far, only 9 have gone to the western conference. Of those 9 westbound awards, only 3 have gone to non-goaltenders.

Now, to be fair, the east coast is where the scoring is at. To date, the eastern conference teams have scored 133 more goals than western conference teams, so I guess I’m not surprised that the offensive awards have been east-slanted thus far. Still, let’s take a look at last week’s stats:
Hm, a close one, eh? 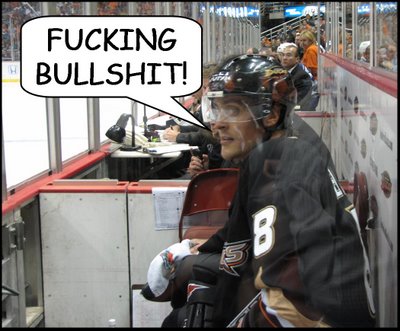 Aw, don’t worry, Teemu. I suspect you don’t really care, and neither do I. It’s just Monday and I needed something to gripe about.

Maybe I can cheer you up with a game of "What’s scarier?"