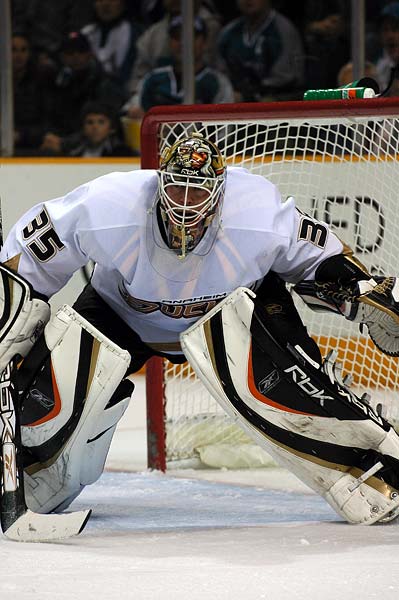 Jesus, everyone take a breather after that game. Seriously, that had it all -- including especially mega-angry psycho woman fan behind me who seemed to think that curse words were normal for play-by-play commentary. She's also one of those blindly homer-ish fans, so even when the refs make a call against the Sharks that is a good call (like the idiotic too many men call), she screams bloody murder and everyone in my section looks at her and mutters under their breath.

Yes, and she's there all season. Woo hoo.

Anyways, this game really lived up to the hype. Two fantastic teams going toe to toe, a soft goal by each, power play tallies, and talent really shining through. Some key things to note:

We've got six more games to go and I hope they're all entertaining like this one and not craptacular like the first game (Ducks fans enjoyed the victory, but that was some ugly hockey...at least this one was spirited).