Share All sharing options for: Anaheim Sucks—Only 2 losses left until the All-Star Break!

"Watch this, Lis. You can actually pinpoint the second when his heart rips in half."
--Bart Simpson, "I Love Lisa"

Well, from my perspective, there is one precise moment when the Anaheim Ducks fell apart and became the Anaheim Sucks, Boxing Day at San Jose. To recap, that is the game where Francois Beauchemin lacerated his spleen and J.S. Giguere pulled his groin. Two games later, Chris Pronger broke his foot, and sure enough, that’s a tough trio to replace. Despite the lengthy IR time, they still remain #1, 3, and 4 in overall Anaheim ice time, and heck, Giguere is still 4th in the league in wins and Pronger is still 2nd in the league in defenseman scoring.

Through Boxing Day, the Ducks were a ridiculous 28-5-6, a .795 win percentage and outscored opponents 3.49 – 2.23. Since then, however, the Sucks have been an inversely ridiculous 2-5-2, a .333 win percentage and a negative goal differential of 2.89 – 3.33. Only the NY Islanders and the Chicago Blackhawks have less standings points since Dec. 27 than the Sucks do. 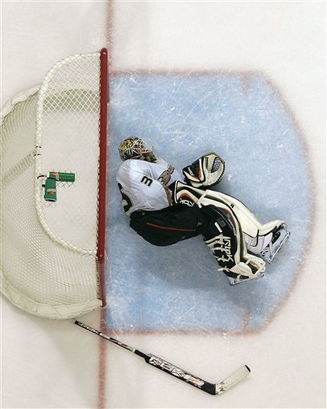 On the blueline, things are equally as crazy, as lots of minutes are being made up by AHL talent despite the fact that Scott Niedermayer has increased his ice time to more than 30 minutes a night. If you think about the collection of defensemen not named Niedermayer, Pronger, Beauchemin, and O’Donnell, these guys used to average a combined 24 minutes per game for the Ducks. For the Anaheim Sucks? That collective number has skyrocketed to 65 minutes per game.

And even among the relatively healthy forwards, suckage has trickled down to those not named Selanne or Getzlaf. In the last 9 games, Teemu Selanne has 10 goals and Ryan Getzlaf has 4. The rest of the forwards combined have 9, including 2 NHL-debut goals from Bjorn Melin and Curtis Glencross.

So, bottom line? The Anaheim squad we’ve been icing the last nine games is unbelievably terrific, putting up points at a rate that would (if extrapolated to a full season) have them finish 29th in the league, last in the west and only slightly better than the Philadelphia Has-Beens. And until someone comes back from the injury trio, I don’t really see these Sucks getting much better.

And yet, despite this colossal fall from greatness, despite the fact that the western and Pacific leads are dwindling away, I still refuse to worry (though I certainly am drinking like I’m worried). Ultimately, only two things matter in my book: making the playoffs (check) and playing well once you get there. Yeah, yeah, home ice and stuff should matter, but recall that in the western conference last year, only once was a team able to win a series with home ice advantage (Anaheim over Colorado). Then again, in the east only one team was able to win a series without home ice advantage (Buffalo over Ottawa).

Per Brian Hayward last night, Giguere, Beauchemin, and Pronger are all on-schedule for their much-needed returns, and I think for Giguere and Beauchemin, that means right after the All-Star Break (which for Anaheim is a welcome 8 days off). Until then, we can probably expect losses in both Edmonton tomorrow and Calgary the day afterward, and will probably find the team behind the surging Predators and neck-and-neck with the quickly-approaching Sharks once action resumes.

Hope’s around the corner, Duck fans, and frankly, this probably turns a dull end-of-the-season into a 2-month-long nail-biter. And as for you Suck fans, well, you probably get two more games to enjoy the limited-time-offer of two free points.

And for me? It's looking like two more games of excess liquor (lately, Johnny Walker Gold). Can’t wait.