Cartooning lessons from the worst cartoonist on the internet

Share All sharing options for: Cartooning lessons from the worst cartoonist on the internet

(HUGE WARNING: I got a pretty good talking to last night from a good friend of mine, and he pretty much convinced me that the contest as I laid it out is a bad idea. His idea is to have two different contests--a drawing for the tickets for those who want to attend, and a cartoon contest for those who would like to try that out but cannot attend, with NHL.com gift certificates for prizes. I haven't made a final call yet, but that idea makes some sense, in that it separates a reader's ability to attend the game and his/her willingness to draw a cartoon. I'll let you know the decision soon, but let me know if changing the rules like this pisses anyone off. After all, it was only a pre-announcement :) )

OK, the contest will officially be announced in a week or so, but E (the Theorist of Ice) writes the shortest sentence of her career, and raises a good question at the same time:

Well, maybe it’s time to go behind the curtain and see how Sleek makes a cartoon or image, which might help some of you and shock a lot of you. WARNING: If you have any photoshopping skills at all, you will have a hearty laugh at my ridiculous lack of software (MS Paint and Power Point), but hey, it’s easy enough a beginner should be able to do it, right?

Think of this as a lesson for those who know nothing, from a guy who knows next to nothing.

Lesson One: learn how to "layer" images in Power Point 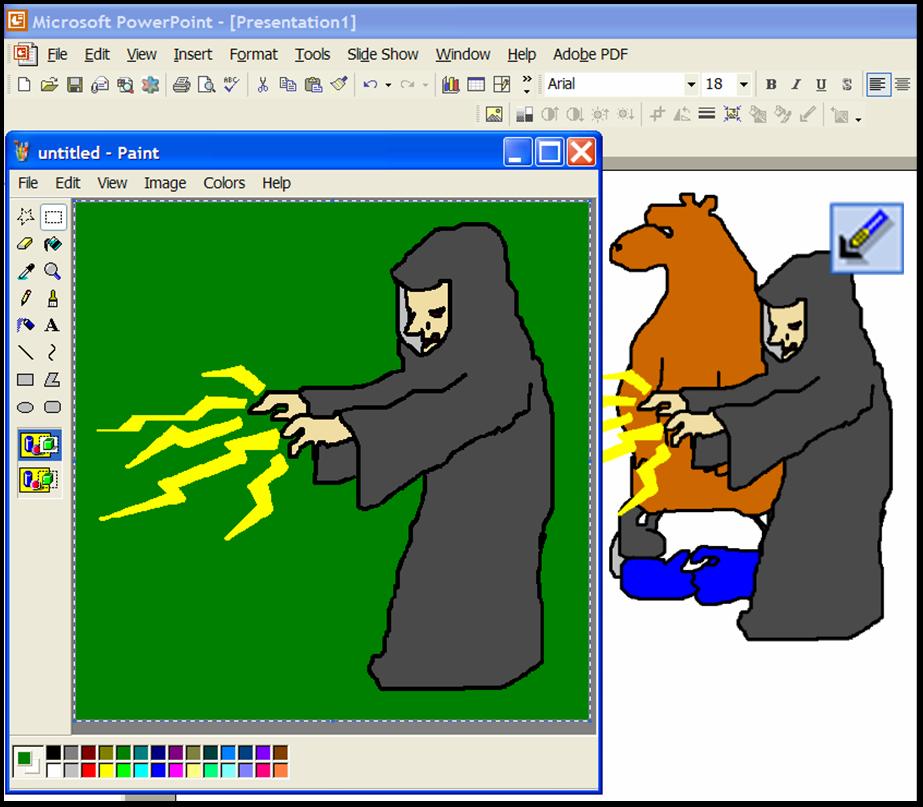 I’ve always found it useful in making cartoons to draw little components separately, as shown above. This allows for different parts to be moved or sized independent of each other, and generally allows for good "framing". The key is the "Set Transparent Color" function in the picture toolbar. My habit is to use forest green as that "transparent" color, because (a) for some reason the function doesn't always work on white, and (b) it allows me to keep actual white in the picture.

Lesson Two: for the bolder, try using photos, too. 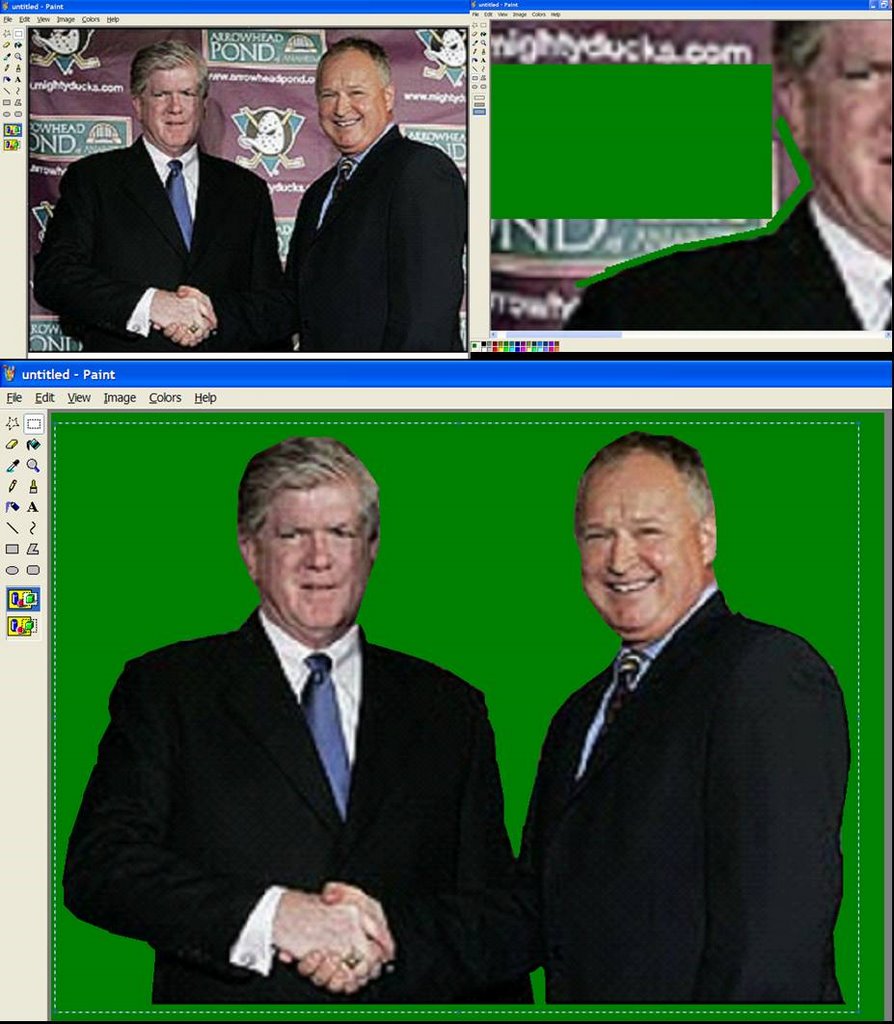 So long as you can color around an image, this works also. I generally zoom in and use fat lines and boxes to fill in the parts I don’t want. This can be tedious (remember: CTRL-Z is "Undo"!), and is probably why my method will be mocked in the comments. But still, it’s MS Paint. Everyone’s got that. 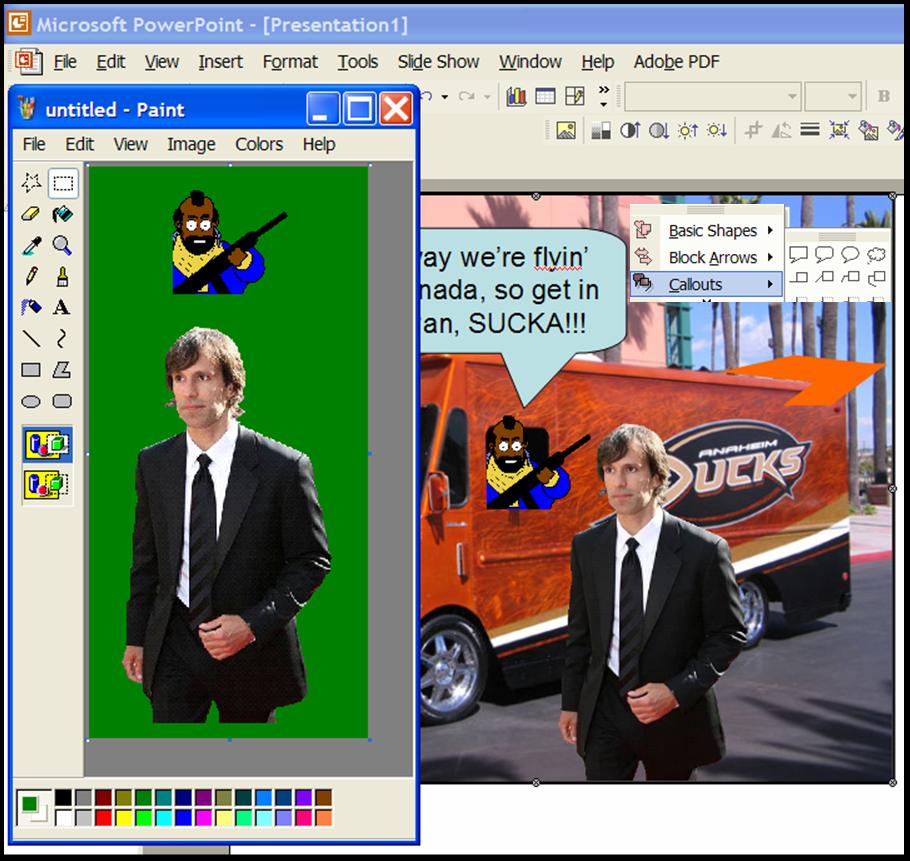 And once you’ve got your elements, the rest is easy. You should probably try to get modestly comfortable with the "Order" and "Grouping" commands in Power Point, but you can add word bubbles or other text, and put it all on a background. Once you’re set, group everything together and save the image as a jpeg.

So yeah, it’s a crummy method compared to what’s out there, I’m sure, but I don’t think it’s out of anyone’s reach. If you’re one of those who thinks you can’t draw a cartoon, you’ve got about as much know-how as I do now, so I’m curious what could be made (not even just for the contest) on this hockoglobotronet.

If you have any problems, you know where to find me.

LEGAL ADVICE: When doctoring material off the web (NHL or otherwise), I’d consult someone with know-how if you start making any money doing it.