Who doesn’t love going out to a game on Saturday night, the climax of the NHL week? Ever since Hockey Night in Canada (and even before HDiC liveblogs), Saturday night has been a hockey staple for fans across the continent.

However, if you’re an Anaheim fan and want to see a Saturday night Honda Center game, you’d better hustle up and go tonight! No shitting, this is the only time this season the Ducks play a Saturday night game at home, the other eleven are all on the road.

This has to be a Samueli-Honda-thing, I’d guess. Remaining Saturday night Honda Center events include Smuckers Stars on Ice, Top Rank Boxing, Front & Center 2007 featuring Chicago, the Amp’d Mobile Invitational (PBR), Harlem Globetrotters, and Eric Clapton. Not a bad lineup, I suppose.
-----------------------------------------------------
While I've spent some time talking the merits of Chris Pronger (Hart/Norris candidate) and Samuel Pahlsson (Selke candidate), I certainly would be remiss if I did not talk about another monster performer, Richard Trophy candidate Teemu Selanne. 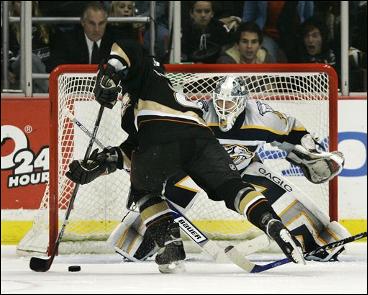 With Teemu's hat trick Thursday, he now co-leads the league in goal-scoring with Alexander Ovechkin and Martin St. Louis (all with 28). Sure, you might point out that the other two guys have played less games than Teemu, but I'd just point out in return that they got a head start, as Selanne had but one goal (!) in the month of October.

In fact, after 12 games in October, Joe DiPenta was the only Duck regular who had less goals than Selanne. It also represents the first time in his Anaheim career that Selanne had gone 10 games without a goal.

Since I called him out, though, he has been absolutely ridiculous, propelling himself first to the team lead and now even a share of the league lead. Look at this chart, and note to yourself that the other five league-leaders are all 31 years old or younger and play in the softer eastern conference (all but Heatley in the supersoft Southeast Division).

How Teemu became a Richard contender: 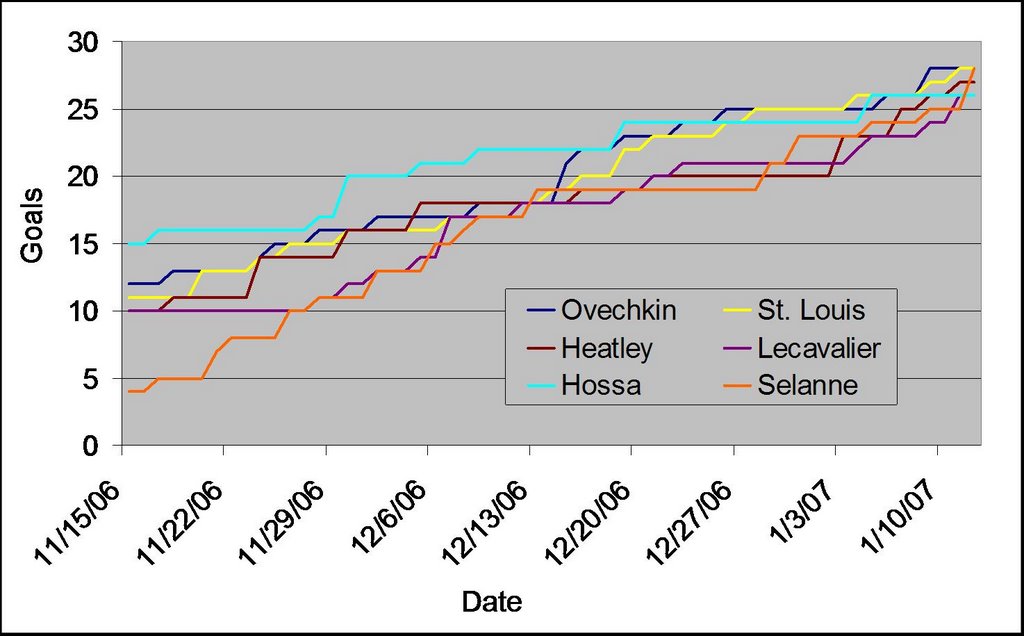 Of course, not all of this is "good news", as the real follow-up question is: what does this cost the Ducks? And quite frankly, I don't know what the salary-cap implications are. You see, Teemu signed a one-year deal last summer worth $3.75 million plus performance bonuses, which I have never seen a breakdown for. My best recollection is that Teemu's contract could be worth as much as $6 M, and you gotta figure this unknown factor as "very achievable" when thinking about Anaheim's available cap room.

Prediction: Ducks 5, Avs 2. Two goals by white-hot Selanne, one each by Pahlsson, Jackman, and Penner.