Share All sharing options for: Ducks Gameday—Pahlsson is god!

[EDIT: I meant to post this Tuesday morning, but as you can see below I was off to WI today, and Blogger didn't get its shit together in time. So now I am in WI, the Ducks have already lost, but I still remain optimistic as to the outcome.]

Tonight is milestone night for my hero Sammy Pahlsson (see my man-love poem here)! Tonight Sammy will be playing in his 238th consecutive game, breaking the Anaheim iron-man record held by Oleg Tverdovsky (who, by the way, has played in only 22 of 44 games since his L.A. acquisition).

Nobody in the league has it as tough as Sammy, if you believe Behind the Net’s 5-on-5 metrics. He ranks 10 out of 544 in the league in the "5-on-5 Quality of Competition" metric, and 535 out of 544 in the "5-on-5 Quality of Teammates" metric. He’s playing a plus-5 differential against the NHL’s best night-after-night, and carrying around lugs like Rob N. and Moen while doing it. 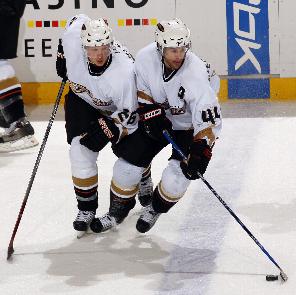 I certainly think there’s a pretty damn strong case not only that Sammy get the Selke Award, but maybe they should consider renaming the award for Pahlsson. He’s a defensive forward’s god.

Unfortunately, though, the Selke will probably go to Rod Brind’Amour, who plays in a much more respectable time zone. To compare, Rod (who is also a +5) plays against easier 5-on-5 opposition (112 of 544) with much better linemates (121 of 544) and does a third of his scoring on the power play. He also has about 60 more PP minutes than SH minutes, but whatever. I’d rather have the Selke-worthy performance than the actual Selke award anyway.


Oh, stability. The guy who’s job it is to put names and numbers on the backs of Anaheim jerseys must be going nuts, seeing has he’s had to create seven new templates over the last seven games for Duck debuts.

And in those seven games? A whopping 2-5 record, though the team has looked better since the return of Bryzgalov.

Meanwhile Nashville enters the game winners of 10 of their last 13. It’s probably worth mentioning, though, that 6 of those 10 wins came against St. Louis and Chicago. Ah, the beautiful disparity of the Central Division!


At any rate, you’d figure I’d have great interest in watching a measuring-stick game between the top two teams in the west, but alas! I am going to be sitting on a plane flying off to sunny Wisconsin for business.

Prediction: I freeze my ass off, while the Ducks sneak a 3-1 win. Goals by Perry, Pahlsson, and whichever other guy is making his Duck debut.