For the first time in a while, I had to check to make sure the Ducks were still in first place, and at least for another day, it holds true. But the team is a mess, and you gotta think that the team is toast until any one of Giguere / Pronger / Beauchemin returns. 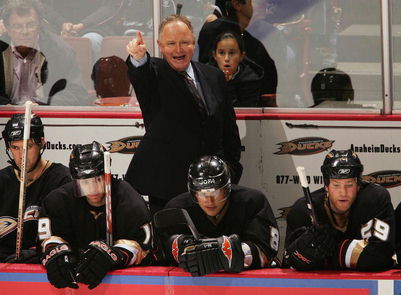 If it can hold together that long. The thing is, Coach Carlyle seems to have acquired an unhealthy appetite for Scott-ch.

That is, Scott-ch Niedermayer. In the eight games since Pronger’s foot crumbled, the captain has played 34+ minutes three times. To put that in perspective, the franchise record for minutes in a game used to be 33, set earlier this year by Chris Pronger, before SNieds THRICE shattered it.

Carlyle’s like a kid trying to break his sturdiest toy: in those 8 games, Scott has played 42% of the even-strength minutes, 63% of the shorthanded minutes, and 82% of the power play minutes, in all averaging to more than 30 minutes a game.

The only two games in the stretch where SN did not play at least 48% of game time were at Dallas and vs. St. Louis, the two "blowouts". In the other six games, he's got an average of more than 32 ½ minutes per game!

Now don’t get me wrong, I'm happy with his increased production (2-8-10 in those 8 games, now leads the league in d-man scoring), and I’m not exactly thrilled to see an opposing forward cross the blueline and see the likes of Kent Huskins or Ric Jackman defending, but there’s a limit to how much Scott Niedermayer should be used on a first-place team in early January (hint: conservatively!).

I’m reminded of the stretch before Christmas where the Ducks played 6 games in 6 cities in 11 days (including two back-to-backs), and much to my surprise, Giguere started all of them. A week later, predictably enough, he was injured, and the team has been in a tailspin ever since. Seemed like a lot of overkill then, and seems like a lot of overkill now.

Here’s hoping that Carlyle lays off the Scott-ch a little more this week, especially in the even more meaningless all-star game.

Prediction: Ducks 4, Oilers 2. (C’mon, they still might be playing like Sucks, but I’m not about to predict a loss!) Goals by Teemu, Pahlsson, Getzlaf, and Marchant.

[EDIT: Some of the usual Oil sources chime in: Battle of Alberta, Lowetide, Real Deal Hockey.]