Hm, more "getting to know ya", eh? Jes Gőlbez started up another blogger tag game, and Mike Chen then passed it on to me. I’m not sure I understand this game entirely, but as I have zero actual hockey skill, I guess I’m just going to play make-believe and invent some on-ice abilities.

Earl Sleek, if indeed he were an NHL-caliber hockey player 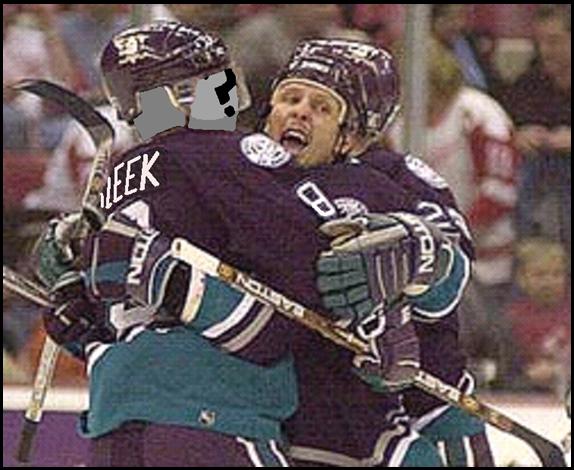 Team: Mighty Ducks of Anaheim (before they sold out to the "man")
Uniform Number: 8 or 13, whichever one Teemu isn’t currently using
Position: checking line winger
Nickname: Pahlsson-lover, Girl Sleek
Dream Linemates: Sammy Pahlsson and (out of retirement) Stumpy Thomas.
Rounding out the PP: Vitaly Vishnevski and Lubomir Visnovsky, it’s always been a dream of mine to see these two paired up.
Job: I’m the set-up guy; I get the puck to Stumpy while Sammy plays as our defensive conscience.
Signature Move: Square-square-triangle. A real doozy.
Strengths: Offensive zone awareness and a regular willingness to wear a microphone.
Weaknesses: I make Stumpy do the fighting for our line, as well.
Injury Problems: Lower-body.
Equipment: An Adam Oates-style stickblade and for sure a visor.
Nemesis: Later it would be revealed that the only reason I devoted my life to making the NHL was to get close enough to murder Chris Chelios.
Scandal Involvement: Even later it would be revealed that my name was never Earl Sleek at all.
Who I’d face in the Stanley Cup Finals: The Devils. We owe ‘em a little G7 heartbreak.
What I’d do with the Stanley Cup after our victory: Oh, it would be one wild party, I can assure you. I suspect I'd get married and divorced within the night.
Would the media love me or hate me? They’d like me all right, until I kill Chelios. Then the good ones would love me.

OK, let’s tag some ladies from the ol’ HLOG (on their own blogs): Sherry, HockeyGirl, and Finny.