Goaltending tandems in San Jose and Nashville are hot like fire 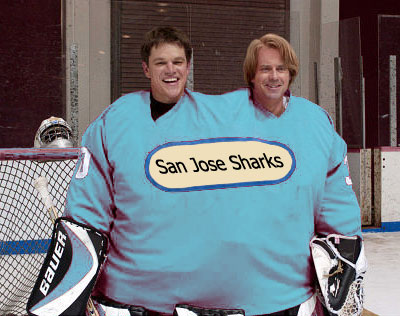 Only two teams in the NHL have a pair of players in the top 10 for a major statistical goaltending category (wins, save percentage, goals against average). The Nashville Predators have Tomas Vokoun [9th] and Chris Mason [7th] operating at a sub-2.50 goal against average. The San Jose Sharks have studiously alternated goaltenders each game, with Vesa Toskala [5th] and Evgeni Nabokov [8th] providing a measure of stability in front of a very young blueline. Each have allowed 2.40 goals against per game or less.

Tomas Vokoun [13-4-1, 2.42GAA, .920SV%] returned from a torn ligaments and fractured thumb recently to find his replacement Chris Mason [17-7-2, 2.36GAA, .928SV%] making waves as one of the top goaltenders in the league. Predators head coach Barry Trotz will alternate Vokoun and Mason until both netminders are ready to compete with each other for the #1 job.

The San Jose Sharks have seen both of their co-#1 goaltenders struggle and shine at times this season. Evgeni Nabokov [11-9-0, 2.40GAA, .913SV%] is in the middle of a rough patch, allowing 3 goals in the opening period in 3 straight games, including being pulled twice against Detroit and Phoenix. Vesa Toskala [18-6-0, 2.32GAA, .912SV%] receives the bulk of the goal support on a nightly basis, and is in the middle of a 4 game winning streak.

In Smashville, things are going to remain status quo until the end of the season. San Jose is a different story. Nabokov seemed irritated and visibily frustrated after being pulled against the Detroit Red Wings. Instead of getting the call 2 days later to redeem himself against Columbus, Evgeni had to wait 6 days when his team came out flat against the Edmonton Oilers.

The Sharks will continue to rotate goaltenders each game, but look for more trade rumors to heat up around the trade deadline. With two rookie defenseman logging significant ice time, and two more defenseman in their sophmore season, a veteran defensive-defenseman could be a necessary addition heading into the playoffs.

There is also an outside chance that a scoring winger could be brough in to fill the hole Mark Bell has left on the first line. With the lack of production from Bell, San Jose head coach Ron Wilson has demoted last year's Rocket Richard winner Jonathan Cheechoo, and run with a top line of Patrick Marleau, Joe Thornton, and Mike Grier to try to create a consistent effort.

Nabokov's no-trade clause and hefty contract will be an issue if teams want to make a move for him, but many have expressed interest in Vesa Toskala. Teams are also going to have to adapt to emerging problems with the goalie waiver wire re-entry circus. Bottom line prediction: all 4 goaltenders stay put and both teams meet in the Stanley Cup Western Conference semis (where each team will rely on only 1 goalie).

Goalie Vesa Toskala, who finished with 29 saves, started for the second consecutive game. This was just the second time that Wilson deviated from his plan of alternating goalies every game.

Evgeni Nabokov started consecutive games against Calgary and Anaheim immediately before and after Christmas, because Wilson was concerned about playing Toskala without adequate practice time. The coach cited the same reason Saturday -- the Sharks didn't skate Friday -- as well as Nabokov's recent difficulties.

Nabokov surrendered three goals in the first period in each of his previous three starts, which included the 8-0 squash two weeks ago in Phoenix. He wasn't entirely to blame on those goals, but Wilson pulled him for Toskala on the first two occasions.

"He's been having a bit of a struggle," Wilson said. "I know for him, the thing he'd like to do is to go back in and play. But the situation is, every point is valuable. And I'm not at the point where it's, `OK, work it out in a game.' We just won't do that. He'll get in a good practice tomorrow. It's just using logic."