Reports of my demise have been greatly exaggerated

Share All sharing options for: Reports of my demise have been greatly exaggerated

No, Sleek is not dead. Sorry for the unannounced hiatus, but after slicing my foot, pulling my groin twice, straining my abdomen, rupturing my spleen, and breaking my other foot, I suppose I needed a few days off.

Oh wait a second, those things didn’t happen to me; those happened to Sean O’Donnell, Ilya Bryzgalov, J.S. Giguere, Todd Marchant, Francois Beauchemin, and Chris Pronger. If you’re napkin-scoring at home, that’s roughly $15.5 million in salary that’s on the mend (O’Donnell and Bryzgalov have returned already, though).

And as for Ducks you’re not recognizing, Kent Huskins (#40) was brought in to replace O’Donnell, and then stayed on to replace Beauchemin. Then Aaron Rome (#34) was brought in to replace Pronger. Travis Green (#39) has been trying to mimic Marchant, while Michael Wall (#31), David McKee (#41), and newly-acquired Sebastien Caron (#29) have been Anaheim’s netminding options (although Wall was the only one to actually step on the ice). Oh, and some breaking news? Ducks have traded a conditional pick to Florida for D Ric "Don’t call me Rick" Jackman to replace the fall of Rome.

Actually, I’m kidding. Scott Niedermayer has tripled his ice time and is replacing everyone.

And as for the results? Overall, the Ducks have lost 8 times in regulation in 42 games this year, but half those losses have come in the last 5 games. Yup, it’s vulnerable time for these Ducks.

And yet, do I panic? Hell, no! I’m having trouble even caring. You see, other than the damage it’s doing to my fantasy teams, Ducks are doing too damn well for me to fret through rough patches like this: So beat ‘em while you can, these part-Pirates part-Ducks. 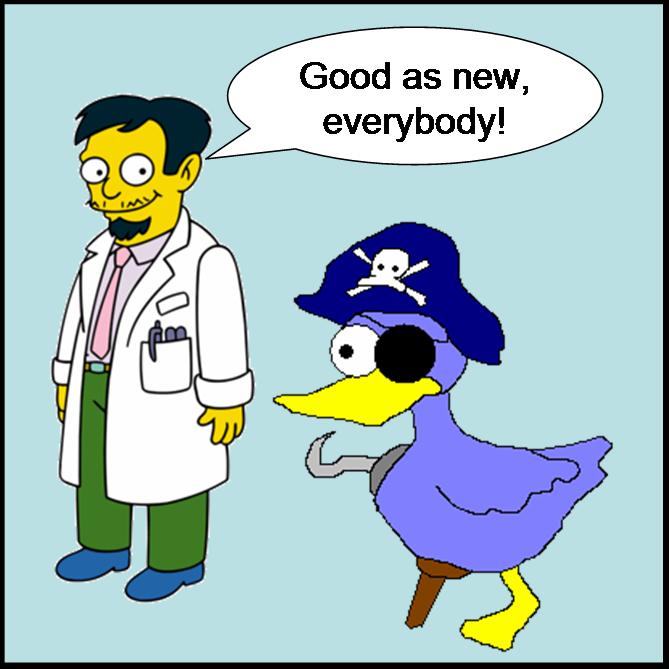 p.s. Everyone’s probably read it already, but Christy at BTJ has some awesome stuff from the Stevie Y. retirement night. Hey, say what you will about the Red Wing winning machine, but at least they leave your spleen alone (exception: employees of Chris Chelios).