Share All sharing options for: Two power play goals from one penalty help Sharks to 5-2 win over BJs 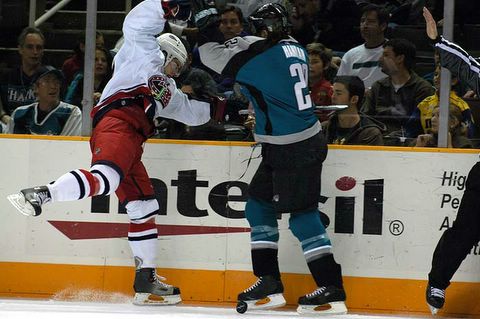 Collision along the right boards 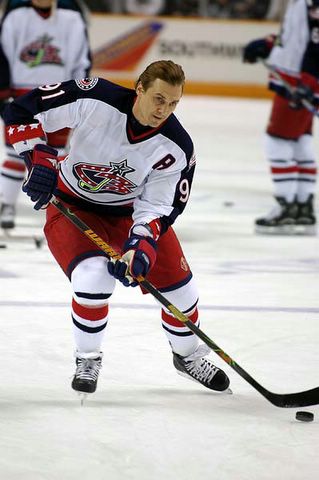 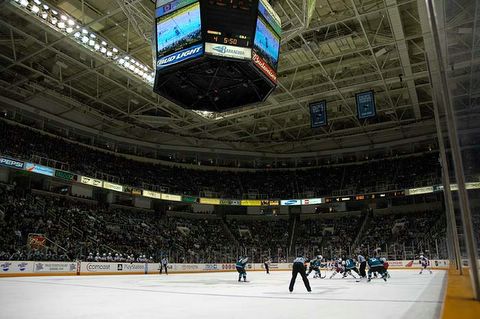 Faceoff in the Columbus zone late in the 3rd

This was an interesting game from a fans standpoint. Sharks defenseman Doug Murray rocked Jason Chimera, who had his head down at the Columbus blue line. It looked like a car crash on the slow motion replays showed on the big screen the rest of the night. Already without Rick Nash and goaltender Pascal Leclaire, the two reasons I wanted to see the Blue Jackets by the way, the loss of Fedorov for an extended period may be too much for Columbus to recover from.

After a goal in the third period, I realized it was a Ryane Clowe hat trick when the bill of a hat thrown from the upper deck hit me in the back of the head. About 10 other hats bounced off of the protective netting. It was not as bad as last year during a teddy bear toss at Stockton of the ECHL. After a few fans realized that they could not get their bear over the netting, they aimed for the first person near the glass they could find. Me. Taunting a few of the fans probably did not help matters much.

After a mistake as big as the referees made on Saturday, letting two power play goals result from one penalty, it would have been hard for the visiting team not to use that as an excuse. But the Blue Jackets would have been rolled regardless. Without Fedorov, Svitov and Modin tried to keep up the attack but the chances fizzled out in the second and third periods. The Sharks were still hurting from an 8-0 blowout loss to Phoenix a few games earlier, and if that can not help them remain motivated, GM Doug Wilson may make some changes.

A photo gallery and a recap from the game is up here. NoCal rules, SoCal sucks. Out.