Share All sharing options for: BoC Gameday—Ducks trade away a real S.O.B.

(Author’s note: Sorry this post is so hasty, but I’ve got very little intuition about trade scenarios Anaheim is involved in or what sort of game the Ducks will be bringing tonight.)

Well, the Ducks and Sharks play tonight’s late game on Versus, and it really has caused some emergency prioritization in the Sleek household, as now there are three simultaneous programs that are regular DVR-recordings: Ducks hockey, Heroes, and 24. Sorry to say, Jack Bauer, you’ll have to catch those terrorists without me this time. 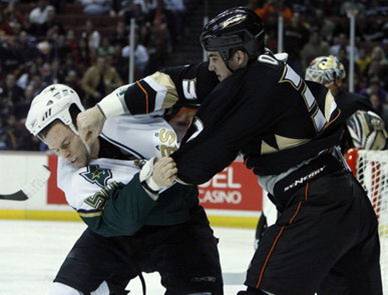 Both the Ducks and Sharks have made trades this past week, but it’s a little tough to comment on them until the other shoe does or does not drop. I’ll leave the Rivet-for-Curious-Gorges trade for the Shark guys to discuss, but as for Anaheim, here’s what I keep referring to as "Deal 1A"—Ducks trade D Shane "S.O.B." O’Brien and a 3rd round pick to Tampa Bay for G Gerald "Gary" Coleman and a 1st round pick. O'Brien is a mildly effective player, and I’ll throw some proper commentary on this if and when we see a "Deal 1B".

As for the game, Sharks are back from a season-high 8-game road trip where they managed to go 4-4 despite being outscored 19-29. The Ducks, meanwhile, have been mostly reliant on their division-heavy schedule to stay atop the Pacific. Ducks since Christmas:

p.s. Check out BTJ’s Behind the Blog this week, featuring Mike Chen, who apparently is brimming with postseason confidence (hee hee, about the Ducks, that is).