Drinky Math: How do you spell "Cheechoo?"

Share All sharing options for: Drinky Math: How do you spell "Cheechoo?"

That guy only knows two kinds of streaks, Cold or Hot, and not much in between. 4 goals in 2 games against the Ducks, which was preceded by a seven game goalless streak, that followed a 5 goals in 7 game stretch, that followed a 1 goal in 9 game slump, and well, you get the picture. 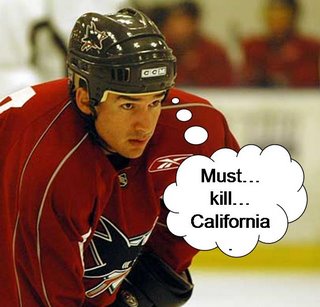 Well, I got curious about one thing, and here's what I found out:

Fuckin' Cheechoo has been murdering his BoC brothers since the lockout.

Since the lockout, roughly one-third of Cheechoo's goals and more than one-half of his multi-goal games have come against the BoC teams.