Share All sharing options for: Exclusive BOC Sharks-Blackhawks photos from the Blogfather 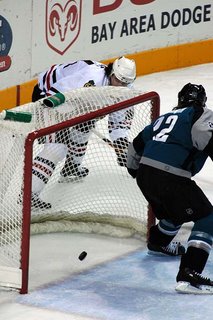 I spent most of the Sharks-Chicago game up near the rafters chatting with Lew Shapiro, PR director for the NHL's Oakland/California Seals (1967-76), and the PHL San Francisco Shamrocks (1977-79). It was interesting talking to him about the media coverage back in the day, the opening of the Oakland Coliseum, and a few other hockey related topics.

I wandered down to the top of the aisle in the lower bowl in the second period to take a few photos. After the above Chicago goal by Martin Havlat over a sprawled Vesa Toskala, one fan in a soccer jersey let out a gooooo-ooo-oooaaa-ooooaaal that would have made Andres Cantor proud. 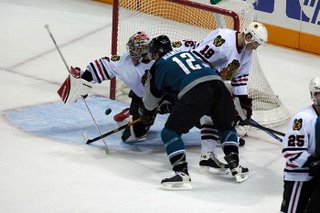 Patrick Marleau answered with a goal of his own a few minutes later. Marleau wristed the puck around Khabibulin before he could reset after a scramble. This time soccer fan stumbled, barely getting out a gaa ol-ol. The section had a good laugh. 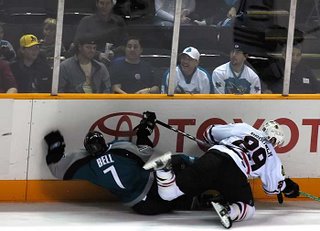 There was a massive collision between Mark Bell and a player who is not on my score sheet, #89 Troy Brouwer. 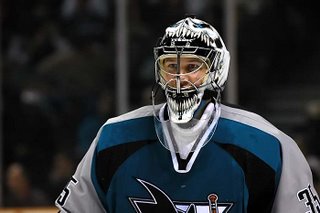 After the game, Vesa Toskala said he could not remember ever scoring 2 assists in a game before. It was 1 point shy of an NHL single game record, and half of the total for current NHL goalie points leader (Turco). When someone jiibed him about Evgeni Nabokov's power play goal a few years back, he said he picked one up in Europe so he was fine. Toskala had an open net late in the third, but he cleared the puck off the boards instead of trying to loft a shot up ice. Given the way the bounces have gone the last few games, smart move. More on the Sharks-Blackhawks here.

Sharks play Anaheim at HP Pavilion in beautiful San Jose on Tuesday, before heading to Anaheim on Wednesday to play in the smog. Let the Battle of California begin! 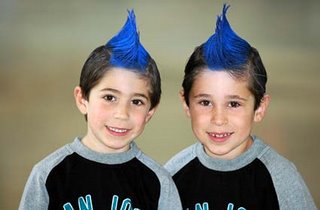 This might be a good look if I attend Wednesday's game in Anaheim.