Share All sharing options for: Fantanking and the Kings 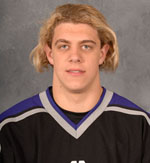 I am a firm believer that most NHL teams aside from, say, the Toronto Maple Leafs should either shoot for a Cup or shoot for high-end draft picks. This subject is illustrated expertly by Bill Simmons in his article about "Fantanking."

The Kings spent far too many years as part of the creamy nougat of the NHL, resting alongside the pre-Cup run Edmonton Oilers, Alexei Yashin-New York Islanders and Chris Pronger-St. Louis Blues as medicore, borderline playoff teams. Sure, it's no fun to be a fan with a paper bag over your head for a couple of years, but there's one other gigantic factor to consider.

The Pacific Division is clearly at its peak right now. 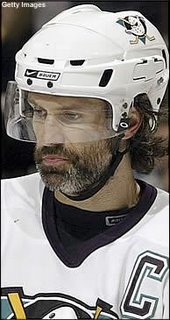 The Ducks are loaded, but when you look at their roster, there is one comforting fact: three of their best players are more than 30 years old and have played a ton of games. Scott Niedermayer (1027 GP; 34 years old) and Teemu Selanne (1015 GP; 36 years old) are remarkably durable, while Pronger is a little more than a season away from the grand mark.

The Kings certainly don't have an answer for either three right now, let alone J.S. Giguere, so why not wait until the graybeards (see: Niedermayer, right) start to break down or retire? Even if they manage to hang on more gracefully than a J. Roenick or R. Blake, age accelerated Norris Brothers seem (slightly) less destructive.

Now, I know the Ducks have some young up and coming forwards, but comparing and contrasting the youth movements of the Kings and Ducks, I'm pretty happy with the dazzling combo of Kopitar, Alex Frolov, Patrick O'Sullivan and Cammalleri, thank you very much. (Not to mention a certain defenseman who shares a name with a surfer-songwriter)

Not too far behind, the Sharks and their awful teal jerseys bring a different threat. When you look at their talented, youthful nucleus - Jumbo Joe (28) Marleau (28), Cheechoo (26), Michalek (23), Carle (22) and on and terrifyingly on - there's one very different friend of the Kings: the salary cap. Keeping two franchise centers, two fantastic wingers and two No. 1 goalies plus sub-30 year old depth together for a few years is possible, but something (hopefully) will have to give.

Again, the practical question is: why fight the Sharks at their best?

Finally, ignoring Phoenix since the Coyotes might be a bigger mess than the Kings, there's the most obvious reason to save your best for a couple years down the road: the Stars. As I mentioned on Monday, The Stars are primed for an under-the-radar run at the Cup, especially with the addition of Ladislav Nagy. By giving up a 1st round pick for a player who might not be a Star in '07-'08, the Stars are a team that will clearly be easier to deal with in the future. 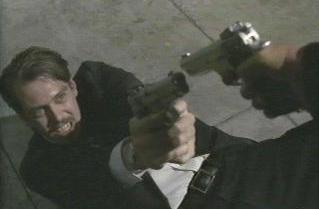 Simply facing a Stars team without Mike Modano, which hopefully will happen in this decade, is enough reason for the Kings to look to the future. So, battle on other California teams. Much like Steve Buscemi in the final scene of "Reservoir Dogs," the Kings would be wise to allow their division rivals to slug it out. Let's just hope the Kings face a better fate than Mr. Pink.