You know, I wasn’t blogging at the time, but one of the most fascinating hockey games I ever saw was at the most recent Olympics at the end of the preliminary round when Sweden took on Slovakia. On paper, it was a meaningless game, as both teams had already qualified for the elimination round.

But oh, those devious Swedes. You see, the seeding in the elimination round was still dependent on this game’s outcome. If the Swedes won, they would be matched up against Canada. If they lost, then it was a considerably easier Switzerland match-up. The IIHF, of course, was not pleased with the situation, and even assigned some sort of "effort assessor" to ensure that Sweden would not tank the game, even though that appeared to be in Sweden's best interest.

Now Sweden lost that game 3-0 in a game that seemed honestly played, then went on to breeze past the outmatched Swiss on their way to a gold medal. Did they tank that Slovakia game? Probably. But more importantly, should they have tanked that game? Definitely. 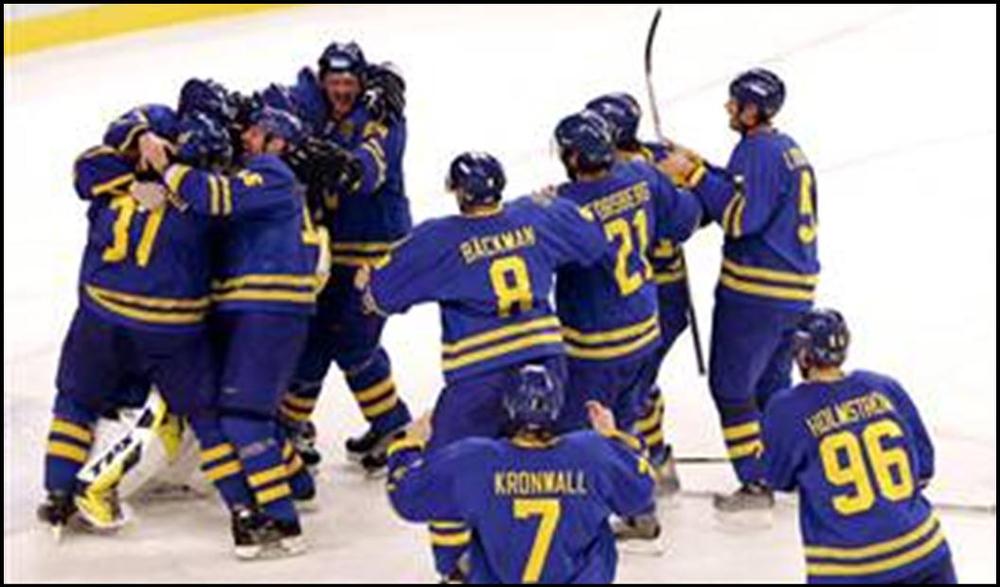 Team Sweden reacts to their shutout loss to Slovakia

You may disagree, but really, the objective was to win gold, and there was a fairly obvious choice that factored very strongly in Sweden’s chances. Sweden is not bound to act honorably in the face of a motivational flaw in the seeding system, nor should they be. Sweden, like all teams, should be looking out for its own interest, and if that meant tanking a game for a more favorable opponent, that was the IIHF’s fault, not Sweden’s.

Anyway, the whole point of that memory jog was to take a look ahead at the western conference playoffs, which are starting to take pretty solid form. In all likelihood, we will see a first round seeding as follows:

I know none of this is guaranteed, but several factors, I think, play into this seeding scenario: Detroit and Nashville’s games against the weakside of the Central, the Pacific trio playing against each other, and the Northwest in general being a self-regulating point-generator. Now who fills what spot is where it gets interesting, specifically as it relates to the three Pacific teams, who are now separated by but 4 points and somewhat safely planning on a postseason (Anaheim 74, San Jose 73, Dallas 70—thank you Nashville and Detroit!).

Now nothing here is as obvious as Canada-or-Switzerland, but if the above seeding scenario holds true, here’s the follow-up truth: Whoever takes 2nd in the Pacific division will face a more difficult opponent than the team that finishes 3rd (and it may be a difference of more than 10 points).

Now points are probably not the best measure of opposition, but still, imagine one of the Pacific trio pulls out to a sizeable lead. That would leave the other two teams with a choice of starting in Detroit, say, or Calgary. Given the choice, a coach might opt for Calgary (or at least decide that Detroit isn’t worth working your tail off for).

Now I don’t know if I have any strong point, really (neither Detroit or Calgary look to be any postseason picnic), but I think it will be extremely interesting to see what happens if a Pacific team pulls ahead in the final third of the season—will the other two teams go nuts-to-the-wall out in order to finish 2nd and play perhaps a better team? Is that sort of effort even worth it?

Or maybe, just maybe, will Swede-think take over, forcing Bettman to play the "effort assessor" card?