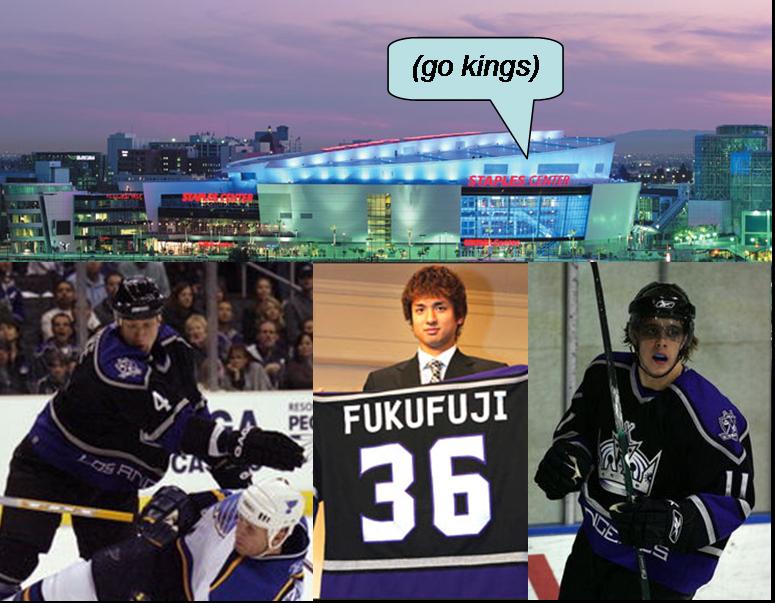 It has been brought to my attention on several occasions (Mirtle being the latest) that this blog fails on its overall premise—biased coverage from all three California teams. And for sure, you can look back through the archives and note that most everything is Duck this, or Shark that, or here’s why the Ducks hate the Sharks, or vice versa, and a lot of that is dictated by standings and the fact that this blog started last postseason, when there were only two CA teams playing (zing!). Oh yeah, plus we plan on blogging through this coming postseason also (zing! zing!).

Even though the Kings’ story looks to be nothing but an 82-game kick-in-the-junk, there’s still been plenty worth writing about the poor L.A. squad over the life of this blog—a new GM and coach, big trades (Demitra, Cloutier, J. Johnson, Avery, Conroy), a mess of goaltender suffering, and both the best Japanese and the best Slovenian prospects in hockey history. (Plus I never get sick of hearing how much everyone hates Pronger).

So yeah, we are putting a "Help Wanted" sign out for a King blogger, anyone brave enough to represent the crowned crusaders for the ol’ Battle of California (which I should point out is extremely non-profit, in the purest sense of the word). What is the perspective from that other CA hockey fan? We’re keeping James O’Brien around for occasional posts, but he’s going to need some help keeping that chin up.

Yeah, I know, it’s tough sledding being a King writer in Shark/Duckland, but if it’s any consolation, it is a pretty fair certainty that the Kings in the near future will be a better team than they have been in the near past, whereas both the Sharks and Ducks have pretty good probabilities to get worse (regressing to the mean), and you have an opportunity to chronicle it and be there as it happens to rub it in our faces.

Besides, even though the Kings get the short end of the stick this year, at least it won’t erode down to a Battle of Alberta debate ("Edmonton 5 cups, Calgary 1. ‘Nuff said."). To date, none of our teams have any cups, so everyone can argue from a position of futility.

Sound good, Queens fan? To apply or ask any questions, send me an e-mail.