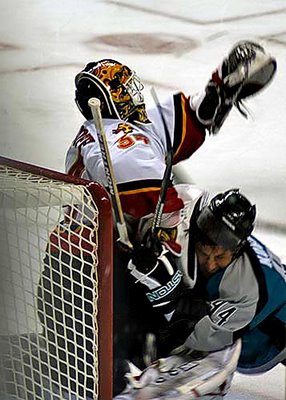 Well, I certainly wasn't expecting to see this in the news:


San Jose Sharks Executive Vice President and General Manager Doug Wilson announced today that the club has acquired forward Alexander Korolyuk from the New Jersey Devils in exchange for a third round selection in the 2007 NHL Entry Draft.
Korolyuk has spent the past three seasons playing primarily for Chekhov Vityaz in the Russian Elite League, where he has posted 38 points (14 goals, 24 assists) in 39 games this season.
"We are very excited to have Alex rejoin our organization and we look forward to him integrating quickly into our line-up," said Wilson. "He brings an added element to our team that has been very effective in the past. Alex knows our style of play and we expect him to be a natural fit."

When Korky left the team, he finally seemed to "get it" -- he was skating hard, using his hard shot, and actually hitting people. I have no idea what he's been doing in Russia, but it'll be interesting to see if he's still playing the way he did when Ron Wilson put him, Nils Ekman, and Alyn McCauley together for a very dynamic second line.

Obviously, this Sharks team is WAY different from the one he last played on. However, the system remains the same and Korky stated before that he was pretty loyal to Ron Wilson for molding him into a better player.

I'm sure Wilson will give him a chance on the top two lines for the first game or two. Do you go Joe Thornton/Jonathan Cheechoo/Korolyuk or do you go with pure speed with Patrick Marleau/Milan Michalek/Korolyuk? And what happens to Joe Pavelski and Steve Bernier when they get healthy? Part of me thinks that this is a depth move in anticipation of finally getting some defensive help.