One trade-deadline transaction that went under the radar

Share All sharing options for: One trade-deadline transaction that went under the radar

In fact, this acquisition happened so late in the day that NHL still has not been notified:

That’s right, we’re trading away future assets for immediate gain, based on RK’s tryout post and the one below, which addresses GM Dean Lombardi and the future outlook for the Kings. (note that it was written before Jason Ward and Mattias Norstrom were moved yesterday).

There will be a little legwork getting RK on-board and posting, but hopefully this will be the last time I post on his behalf. Any way, read on for more Kings thoughts, and feel free to welcome Rudy Kelly aboard.

A Riddle Wrapped in an Enigma Surrounded By Terrible Hockey 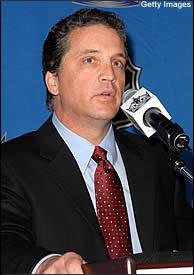 When the Kings hired Dean Lombardi, I was pretty stoked. I read an article about him that discussed his love for stats and his close relationship with Billy Beane, the GM for the Oakland Athletics and a revolutionary in the baseball world. I figured that Lombardi would be able to find the deficiencies in the scouting of hockey players and quickly get the Kings back on top; obviously, that hasn’t happened. Lombardi’s moves have been confusing (or retarded, depending on your view), but there are three different theories that I think can explain Lombardi’s mindset. But first, a few things to keep in mind:


Theory 1: He’s an idiot. Lombardi’s stated goal at the beginning of the year was to keep the Kings competitive while building on the fly, so he tried to shore up the defense by signing Rob Blake and then trading for Dan Cloutier, thinking that he’d be something other than mind-blowingly awful. The trade of Pavol Demitra was acceptable because Patrick O’Sullivan would do a good job of filling the void.

Why it’s Implausible: This theory doesn’t really hold for me because I just can’t believe that someone would be stupid enough to look at this team at the beginning of the year and think it was playoff-caliber. The trade of Demitra kind of puts a hole in this one too. You wouldn’t trade your best offensive player if you really wanted to be good. Also, he wouldn’t have traded a promising young defenseman for an even more promising (promisinger?) defenseman who wouldn’t even play this year if his goal was to win this year or the next.

Theory 2: He’s an evil mastermind. When Lombardi said that he presented a plan that called for a complete overhaul and owner Phil Anschutz rejected it, he was lying; the plan all along was to have this team be terrible but Lombardi lied to keep the season ticket holders happy.

Why it’s Plausible: The trades for O’Sullivan and Jack Johnson help this theory. Why would Lombardi trade for two players who wouldn’t have a big impact for at least two years if he didn’t want to be terrible this year? He signed a bunch of mediocre veterans to short deals to give the appearance of depth when he knew that they wouldn’t have an impact in the long run. Plus, isn’t it more comfortable to believe that Lombardi knew Cloutier would be as bad as he was?

Why it’s Implausible: I don’t like this theory because it implies some sort of wide-ranging conspiracy, and I generally don’t take to conspiracy theories. (Except for the one about how Rod Brind'amour is actually Frankenstein. I mean, Jesus, look at his face!) Plus, when has Anschutz ever shown a willingness to spend money on anything, let alone on something that would ultimately end with the Kings being this bad?

Theory 3: Lombardi tried to rebuild while also keeping the team competitive, but failed. The signing of veterans in the off-season would keep the team afloat while the younger players got their feet wet. Cloutier would help the team stay competitive and possibly sneak the team into the playoffs. The veteran-laden defense would make up for the young offense.

Why it’s Plausible: A lot of this depends on what you think of Dan Cloutier. His performance has been hilarious (at least to my Duck-supporting roommate), but you can’t let that color pre-season expectations. Lombardi traded for Cloutier because he didn’t think that Garon and LaBarbera could be a consistent goaltending duo. Cloutier wouldn’t remind Kings fans of Rogie Vachon, but he would be consistent enough to win a few games until recent draftee Jonathan Bernier would be ready to take over the reigns. This obviously didn’t work out, but the theory still seems plausible. (To be fair, Cloutier was consistent; he was just consistently awful.)

Why it’s Implausible: This theory can be hard to accept because the opposite of what was intended occurred. The offense has been good this year (though hurt by a lack of depth) while the defense has been poor. There have been breakout seasons by Anze Kopitar, Alexander Frolov, and Mike Cammalleri, while Rob Blake, Mattias Norstrom, and Aaron Miller have looked cool (sweet goatee, Blake!), but have played pretty terribly. This can make people forget that our offense was supposed to be the weaker aspect of the team as the season opened. Remember that at the beginning of this season Kopitar was surrounded by doubt because no one knew where the hell Slovenia was, Frolov was still derided as inconsistent, and Cammalleri could never be a good player because he looks like he’s 10 years old.

When Lombardi said that his goal was to rebuild on the fly, I think he was being somewhat dishonest (though not to the extent that I’d say he was lying). I don’t think the goal was to make the playoffs this year, and I’m fine with that. At the same time, I don’t think he wanted to be in the hunt for the top pick in the draft for publicity reasons. The terrible goaltending severely hurt Lombardi’s plans and he has been attempting to come up with some sort of compromise ever since.

It’s important to remember that a GM can’t be expected to have a plan and completely stick to it. Lombardi expected to rebuild, but he tried to get Zdeno Chara and Patrik Elias when he could because they were good players who were available. He has shown a willingness to divert from a plan if it means that the Kings can ultimately benefit. (I think the Jack Johnson deal was a reflection of this.) This is good, because his plan this year seems to have not worked out. His willingness to change and adapt gives me confidence in Lombardi, even if this season has been a disappointment in some ways.

That contract extension to Cloutier, though… never mind, this guy’s an idiot.