So you want to be a Kings blogger, Episode I

Well, well, well, Kings do have fans with typing fingers, it seems. Meet 'Rudy Kelly' (another solid blog-alias) who was brave enough to answer our call for another Kings voice in this Ducky/Sharky world we live in. He's definitely a front-runner in that (a) he's the only one who's submitted anything, and (b) he's actually got opinions as to the direction of the Kings.

As I wrote back to RK on our first e-mail exchange, I'm a long-time Ducks fan, and it is pretty telling that I don't have much of an opinion on long-time King Derek Armstrong (who RK addresses below). He's a guy I generally don't notice on the ice, am not afraid of in any sense, nor do I worry when he signs a 2-year extension. I believe the term I used was "strong indifference".

So any way, here's a little 'try-out-post' for RK: take a look and see how a Kings fan feels. Oh, and if you're a King fan who can do better, follow the link above and we'll make this a regular "American Idol" (without the prestige, of course).

Armstrong Can’t Do the Heavy Lifting 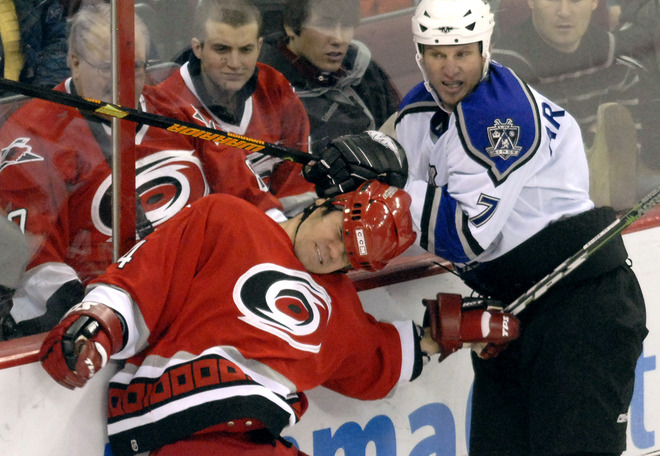 I’ve always had an indifferent attitude towards Derek Armstrong. When a friend asks me about him, my first response is usually, "Who?" That’s followed by, "Oh, yeah, he’s alright, I guess." I’ve always been pleasantly surprised by Armstrong because I’ve never expected anything from him. He’s been the guy who plays until the Kings improve and find someone better. The new contract he signed with the Kings on Wednesday (for two years, 3 million dollars total), however, implies Derek Armstrong is a bonafide hockey player; that is not something I’m willing to accept.

Derek Armstrong’s path to the NHL was not an easy one. A 6th-round draft choice in 1992, Armstrong floundered around between the NHL and the minors until 2002, when he joined the Kings. Since then, he’s been a fairly solid contributor, averaging around 62 games played and 38 points the past three years. He’s set to blow by both numbers this year (he’s at 54 games and 39 points as of Friday) while anchoring the Kings’ top line alongside Mike Cammalleri and Alexander Frolov (although on that line Armstrong plays the role of "the other guy.").

That being said, why do I dislike Derek Armstrong now? First of all, he’s 33; I don’t think we signed him because of his upside. I have a hard time believing that money couldn’t have been used to sign someone with similar ability that’s younger. Secondly, I can’t really see where Derek Armstrong fits into GM Dean Lombardi’s grand scheme. Anze Kopitar has locked down one of the Kings’ top center positions for a couple of years to come (and a top spot in my heart) and Armstrong is not quite talented enough to play second-line center for a Stanley Cup-contending team. At the same time, he’s not a defensive center, and even if he was, the Kings already have Alyn McCauley tied up for next year. Perhaps his destiny is as a 4th-line center, but 1.5 million dollars a season is a little much for that position (though the Kings have shown they have no problem signing veterans and then have them play on the 4th-line, like Brian "Career-High 19 Goals" Willsie and Scott "The Wrong" Thornton). The problem with Derek Armstrong is that he does not really have a set position; if he played basketball Armstrong would be a ‘tweener, in baseball a swingman.

I wish that I could see both the Kings and Armstrong succeeding, but it’s more likely that he’ll join the long list of Kings players that I hate (right before Len Barrie). He seems like a good guy, what with the Mohawk and his penchant for practical jokes (sewing someone’s pockets together? Oh Derek, you card!). It’s also never a bad idea to have a back-up plan at a position like center, especially since it seems that Alyn McCauley’s knees are weaker than Joe Thornton’s hold on heterosexuality (zing!). Maybe I just don’t like this signing because it embraces mediocrity. With Armstrong, what you see is what you’re going to get. That’s the problem.

I’ll make a deal with Kings management: as long as this signing was done with the idea that Armstrong will play on the 4th-line, I’m perfectly happy with the signing. Nobody likes the idea of a front-office that’s disloyal to its players, and if the Kings want to reward a player who has only done what’s asked of him, great. If this signing is supposed to quell the voices of those who scream for another legitimate top-line center, then I think I just threw up in my mouth a little bit.