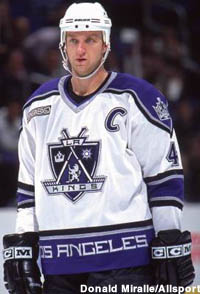 "Rob Blake: For some reason Blake's name popped up this week in the rumor mill, shipping him to the San Jose Sharks. Don't bet on that happening. Kings GM Dean Lombardi apparently wants to keep Blake around to tutor promising young defenseman Jack Johnson."

Rob Blake, bad team or not, has had a horrendous season. He managed 3 points in his last 10 games. His plus/minus is an atrocious -25. Even if his numbers improve, it is obvious that his best days are behind him and that his skills will only decline from here.

I have to ask: is a $6 million "tutor" really worth it? Granted, Spector plainly stated that the Blake rumor mainly came out of nowhere, especially since his supposed destination would be San Jose. Blake in those awful uniforms certainly would be a terrifying sight on a couple levels (not to say he looks great in our duds, to be honest), but what would the Sharks hypothetically give up for Blake?

Either way, I'm not sweating it too much.

If Blake stays and the Kings can re-sign Lubomir Visnovsky and scuttle Jack Johnson out of Michigan, something nice might be developing in front of our woeful goaltenders. And better yet, he only has one year left on his contract.

If Blake is traded, the Kings might get a minor-to-quality addition(assuming it's a 1st round pick in the 20s or a prospect) and $6 million to throw at someone who can "tutor" by feeding the puck to Frolov, Kopitar and Co. (say, a Chris Drury, Scott Gomez or someone of that ilk).

Hey, when you're losing like the Kings are, it's nice to have a win-win situation every now and then, right?