Share All sharing options for: Ducks Gameday—overdosing on Blue Jackets

As I noted in the previous BJ Gameday Post, the NHL schedule-monkeys went a little crazy when it came to Columbus and Anaheim—they didn’t meet at all the first half of the season, and now the Ducks get to finish up their regular season by seeing Columbus three times over their last dozen games.

I won't lie to you; it looks pretty comfortable for the Ducks, who have an 8-point division lead on both the Stars and the Sharks. Looking at Anaheim's remaining schedule, there are only four games left this season that involve teams with immediate postseason plans (Dallas x2, Detroit, and San Jose). The other 8 games are all also-rans (Columbus x3, Chicago x2, Los Angeles, Phoenix, and St. Louis), so at least in terms of set-up, the Ducks look positioned to end the season strong and hold that Pacific title.

That said, the west playoff picture looks to be awesomely tough this spring. I'll make a different post about that (so as to not bore any CBJ or LAK fans out there), but suffice to say there is no team that I am salivating to play nor is there a team I think we are doomed against. These kind of statements would be lunacy out east.

On the other side of the world is Columbus, who really needs to step up in order to even re-achieve futility—they need 13 points in 13 games in order to match their 74 standings points from last year. Even though they project to improve their goals-against by some 30 goals, their offense looks to be down about 18 goals. Power-play and penalty-kill rates look to be really close to last year, though it should be noted that CBJ is cleaning up its act in one regard—they project to have 70 fewer shorthanded situations than they did last year. 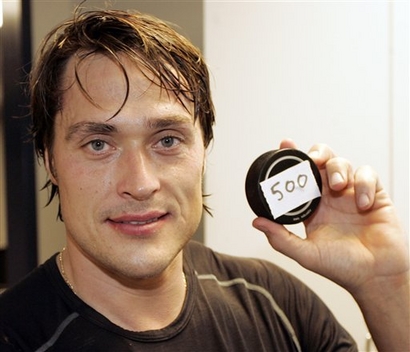 I guess as a segue, I’ll note that Columbus’ highest goal scorer—Rick Nash, with 21 goals this season—has one less total goal than Teemu Selanne has power-play goals.

Of course, congrats are due to Mr. Ketchup, who on Sunday became the first player in NHL history to have back-to-back 40 goal seasons over the age of 35. Quite stunning, really. I mean, he’s really book-ended his career really well; I never figured the guy who sets an improbable ‘old man’ scoring record would be the same guy who set an improbable rookie scoring record—he’s doing it on both sides of the age spectrum.

Just for fun, I decided to track ‘important’ goal-scorers since the lockout. This considers not only NHL regular-season goals, but NHL playoff goals and Olympic goals as well, all rolled up into one goal-tallying table. I’ve ranked them by goals-per-game, but note that Teemu is tied for third in the overall goal count.
Of course, we should also take note that Teemu is 8 years older than anyone else on this list (to be fair, Jagr barely missed the cut), he's one of only four players who toil in the western conference, AND he’s played more ‘important’ games than any of them.


Prediction: Ducks 5, Blue Jackets 2. (If you recall, the last meeting between to these teams was easily the biggest kick-to-the-nuts games of the season. Ducks are leading 3-0 at Honda Center with 10 minutes left in regulation and manage to come out of the game without a point. Ric Jackman, making his Duck debut, gets the fastest minus-four in the history of stage fright, and Selanne fails on a last-minute penalty shot. So anyway, this time they get things right.) Goals by Perry, Selanne, Jackman, Pahlsson, and this-time-for-sure The Moustache.