SON OF A BITCH!!! I’ve been looking forward to today’s matchup for more than a month, because my friend the Demon had gotten me a free lower-bowl ticket, even before the notion of Peter Forsberg had entered the picture. Everything was looking rosy until early last week, when my employer decided to ship me off to Seattle to visit with clients tomorrow morning, and no airline had a flight that could have me in Anaheim Sunday night and in Seattle Monday morning, so basically, I got screwed. Instead of seeing the current top two seeds in the west battle it out (live and in the flesh), I’ll instead be cut off from the scoreboard in the interior of a plane cursing the work/hockey gods for their cruel little schedule conflict.

I was really looking forward to testing my perfect record when in attendance against the "best" team in the west, also. Here is a list of games I’ve been to this year, and their outcomes (I've linked to earlier posts; the Row B ones are particularly fun):

So that’s it—a perfect 5-0 record against each of the Pacific foes by a combined score of 25-9. I haven’t been to a game in a while, and now my planned Nashville excursion is shot through the heart, so unless things change, my only remaining game will be the last home game of the season on April 4th, once again against the neighborhood Sharks. I have to apologize for not following through on the contest, though. It wasn’t a well-thought out idea, and I basically just chickened out. It’ll be me and PJ and two of my friends now, so it still should be a blast. 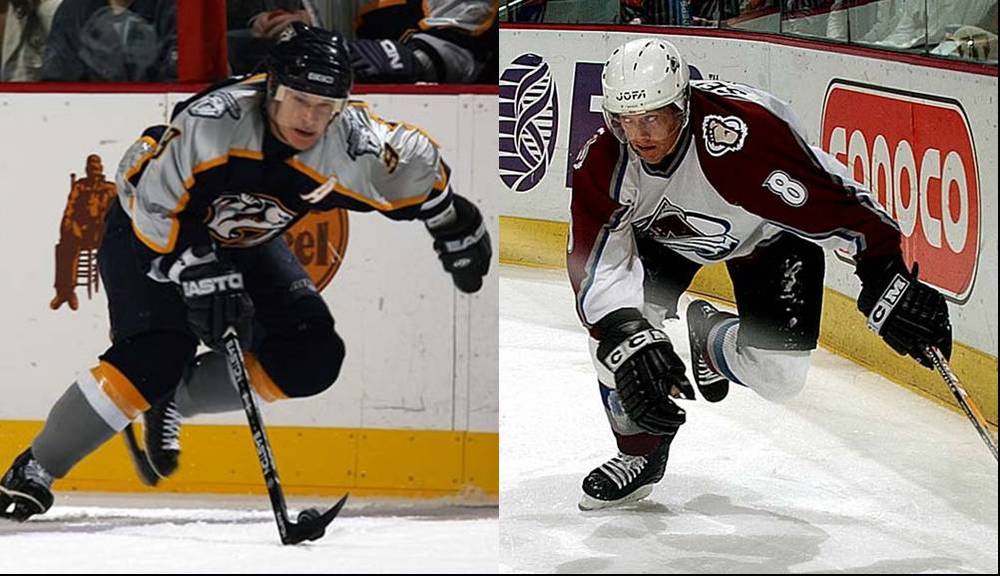 Anyway, I did want to tell a little side story that involves two of tonight’s prominent stars I’ll be missing, Paul Kariya and Teemu Selanne, a little confessional, if you will. I had previously mentioned in an earlier Nashville post that I, personally, never could bring myself to boo PK after he left Anaheim. I went to last year's Nashville game with the full intention of letting him have it, but when it came time I couldn't do it; I was too overwhelmed with great memories of the guy. But really, that is only half the story; I didn’t tell about the time that I did boo TS during his Anaheim hiatus.

Back in 03/04, following the Mighty Ducks’ miracle SCF run and the departure of PK, I went ahead and bought tickets for the first Colorado game in Anaheim, to boo the hell out of traitors PK and TS, who both accepted lesser offers from the Avs to play for a ‘legitimate cup contender’. By the time the game rolled around, though, PK was on the injured list, so there was only one target for my verbal abuse that night—Teemu Selanne.

Of course I was drunk, and I don’t remember a lot of what I threw out that night, except one particularly bright taunt has always stayed with me: "Hey, Selanne, ya sissy! I’m gonna name my daughter ‘Teemu’!"

So there you have it. Since then, though, I have certainly regretted the incident, and have resolved to make up for it by actually turning the mean joke into a solemn pledge—now in honor of the great Finnish Flash, I am going to name my daughter 'Teemu' (whenever THAT happens!). I will turn what was once a vicious insult into a lasting token of my respect to one of the great scorers of our generation.

Just hope it’s OK with the future wife (gulp). At any rate, go get 'em, Ketchup.

Anyone else want to tell a story of a time they’ve regretted badmouthing a player? Comments are open.