Mathieu Garon has not had an easy life. For one, he’s pretty much bald at age 27, which sucks. For two, he’s never really been given a fair shot to claim a #1 goaltending job in the NHL. He came up through the Canadiens farm system but was blocked by the good Jose Theodore (not to be confused with whoever that is playing in ). When the Kings traded for him (giving up Radek Bonk and Cristobal Huet, neither of whom I think have done anything since), many thought that he would flourish and give the Kings a steady goaltender for the first time since the Dread Pirate Hrudey. For one reason or another, that just hasn’t happened. 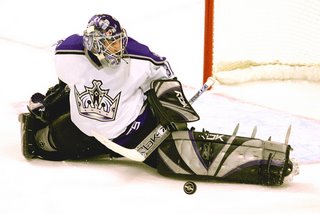 At the beginning of last year, Garon started off great; he posted a GAA of 2.4 and a save percentage of .924 in the month of December, earning defensive player of the month honors. He tapered off pretty badly towards the end of the season (his numbers after the all-star break: 3.56 GAA and .877 SV %), but I think that was more due to the disgracefulness of the Kings’ defense and the fact that Garon played 63 games after only playing 19 the year before than the fact that he sucked. Still, the casual observer would obviously point to him as the reason for the Kings’ struggles. More importantly, I think, it left new GM Dean Lombardi with no choice but to try and upgrade the goaltending. It would have looked bad for him to come in and say that last year’s goaltending duo was satisfactory when the Kings had so much trouble keeping the puck out of the net.

Garon started this year backing up Dan Cloutier, despite the fact that Garon is a better goaltender in every facet of the game. (I guess Cloutier is probably a better fighter, for what it’s worth.) Cloutier played badly (that’s being kind) and Garon had his chance to claim the Kings’ starting job and give Lombardi a reason to sign him to a deal at the end of the year. He promptly broke his finger in January.

The Kings brought in Sean Burke during the Barry Brust/Yutaka Fukufuji debacle to give the Kings some type of stability in net. He played pretty well in January and February, but has since played like a guy who’s 40 years old. Garon is better than Burke, just like he was better than Cloutier; the problem is that you can’t ask him to prove it. Garon will be an unrestricted free agent at the end of this season and it’s unlikely the Kings will sign him. For some reason, it just hasn’t come together here in L.A for Mathieu Garon. What I worry about is that it’s going to come together somewhere else.


I hope Garon’s playing tonight against the Blackhawks, but I can understand if he’s not. I can already see Garon, in an interview with The Hockey News this time next year, discussing how great it is to be playing good hockey again after all the injuries with the Kings the two previous years. That’ll be the same day that Jason LaBarbera pulls a Shaun Livingston on both knees and when I’ll be sentenced for Dan Cloutier’s murder. (After this report in today’s L.A. Times, I don’t think there’s a jury in the world who wouldn’t consider it justifiable homicide.)


P.P.S. There’s an article here at Hockey’s Future about the Kings’ top 20 prospects that will make you feel better. I wouldn’t be surprised if we saw a couple of these guys (Jack Johnson, Brian Boyle, Richard Petiot, Scott Parse, or Peter Kanko) making some noise and possibly the team out of training camp.