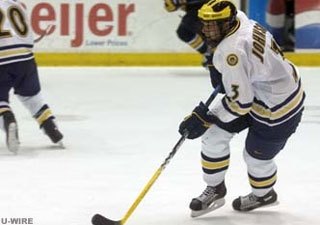 According to Mirtle, the Kings are very close to signing uber-prospect Jack Johnson to a major-league deal that scared the Hurricanes so.

Our very own PJ Swenson tried to draw a little air out of the 'ol Jacko balloon in the linked thread, but Kings fan can feel free ignore all that "bad penalty" talk right now, not to mention the even scarier Sandis Ozolinsh comparisons. (Yikes)

This is a time for much rejoicing. Remember, Jack, old people can still go to college but only young people can win a Calder and bang an Elisha Cuthbert-sque puck bunny. I mean, seriously, all due to respect to the University of Michigan...but Hollywood crushes Ann Arbor on the babe scale. Not that either place wants anything to do with this author, but that's really a moot point.

Anyway, I was actually working on a little profile for him earlier this month, so I figure that I'll slap some of it in here for people who might want a bit more info on JJ.

It was no secret that the Carolina Hurricanes were having major problems luring the third pick in the 2005 NHL Draft out of Ann Arbor. But that being said, it still was pretty shocking to read the following deal:

Jack Johnson to the Kings for Tim Gleason and Eric Belanger (Let's just forget all about Tverdovsky). Yes, there were rumors about the 'Canes moving Johnson, but to the Kings? It was a fantastic surprise for fans such as myself.
Check out this engrossing little feature: "Johnson is key to Kings' future" by Chris Foster

"The first time we put Jack on the ice was when he was 4, and he stood up and just started skating," said Tina Johnson, his mother. "He didn't fall, he didn't wobble. He just skated to the other end of the rink." - Los Angeles Times

Johnson receives an "8.5 B" score from HockeysFuture.com

Another source on his signing with the Kings

Finally, fairly comprehensive stats of his career so far.

...Excited? Just a touch. Even though it isn't a surprise, it's still a relief.