Kings Gameday: The Good, the Bad, and the Ugly

Share All sharing options for: Kings Gameday: The Good, the Bad, and the Ugly 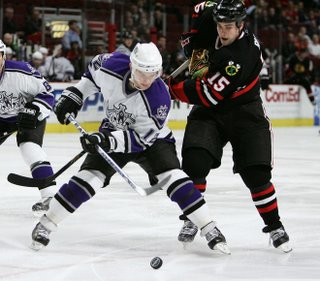 The Good: The play of Patrick O’Sullivan. O’Sullivan, who was sent down to the minors at the beginning of the season because of poor work ethic (and a lack of production), has been on a tear of late. With a goal and an assist in yesterday’s game against , the fightin’ Irishman now has a 7-game point streak with 10 points in that span.

I never really bought into the whole "poor work ethic" thing; it was more likely that O’Sullivan was simply having trouble in a league where he can’t skate through people. Guys who are skill players in any league often have trouble adjusting to a league with athletes at every position. They don’t do that great at first and are criticized for "not doing the little things well." The top scorers don’t have this problem; when was the last time someone criticized Teemu Selanne for not going into the corners? Now that O’Sullivan has seemingly figured out how to make good passes and find the open lane, I don’t think we’ll hear too much talk about his work ethic anymore.

Also of note is the premiere of Joe Piskula, a defenseman for the Kings who until recently played for . There’s a lot of talk on this site (mostly by me) about how terrible some hockey players are, but it’s still nice to see a guy get his shot at the NHL. Piskula wasn’t drafted originally and worked his way into an important role on the squad, so I’m sure last night was pretty special for him. In honor of that, I’ll wait until at least next week before I mock his playing ability and question his sexual orientation.

The Bad: The injury to Lubomir Visnovsky. Lubo is likely out for the season after cracking his ankle in a recent game. Lubo has had a great season and is one of the more underrated players in the game. His offensive skill is well-documented, but his ability to snuff out the play on the defensive end is virtually ignored. Visnovsky is not as good as Scott Niedermayer, but the gap is not as big as many would have you believe. Blake is probably out tonight as well with a strained neck. Both guys would probably be playing if the Kings were close to a playoff spot, but there’s no point in aggravating an injury in a meaningless game. But still, these guys are pussies.

The Ugly: The impending ass-kicking tonight, courtesy of the Minnesota Wild. The Kings meet up with old friend Pavol Demitra tonight as they face the Wild, who have been playing insanely good lately. They’ve won their last 8 games and are finally healthy after suffering various ailments throughout the course of the season. Leading the charge has been Demitra, who in his last 23 games has scored 32 points, putting him at 64 points in 66 games this season. The Wild also have Brian Rolston, who has a ridiculous shot, and Marian Gaborik, who is probably the only Slovakian who is both more talented and more injury-prone than Demitra. I’m terrified of the Wild because they are skilled offensively and also have one of the best defensive coaches in the league in Jacques Lemaire. They also have this guy: 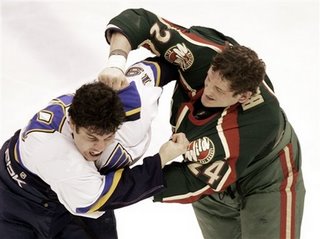 That monster is Derek Boogaard, listed at 6’7", 254 pounds. It should be very interesting tonight because Boogaard often dominates his rival pugilists by throwing them around; Raitis Ivanans (6’3", 263 pounds) is not a man who is thrown around. If Boogaard and Ivanans fight, I imagine a brawl of biblical proportions. I really, really want these two guys to fight.


Prediction: "If you save your breath I feel a man like you can manage it. And if you don't manage it, you'll die. Only slowly, very slowly old friend."