Share All sharing options for: Kings Gameday: The Return of Mattias Norstrom 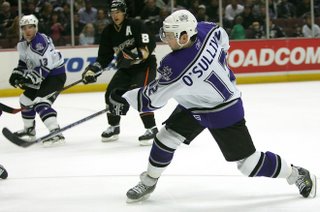 The Kings have had a little bit of a break after their whirlwind tour last week (where they played 5 games in 8 days). They were relatively successful, too, going 3-0-2. A lot of credit has been given to the younger guys (and deservedly so), but I think a big part of the Kings’ improved play recently has been the fact that our older guys have stepped up a little bit. I’ve liked the way Brian Willsie has been playing (who knew he could shoot?), while Scott Thornton and Jamie Lundmark have actually given the Kings a little scoring from their third line. Maybe Dean Lombardi was right after all and these guys can be legitimate hockey players.

In other news, it’s going to be interesting to watch in the next couple weeks as both Brian Boyle and Jack Johnson should be winding down their college hockey careers. Boyle’s team, Boston College, kicks off against St. Lawrence on the 24th and then will probably play New Hampshire on the 25th. If BC loses either one of those games, look for Boyle to sign with the Kings and possibly play with Manchester. Boyle is intriguing because he’s a 6’7" center, but there’s been talk of possibly making him a defenseman. He might not sign this season if the Kings decide they don’t want to mess up the chemistry in Manchester as they head towards the playoffs, but I’m really excited about this guy come training camp next season. He's definitely a project, but he could end up being one of the Kings' best players when it's all said and done. I mean, he's huge! 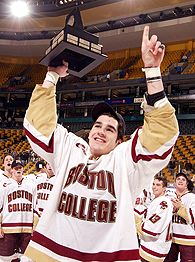 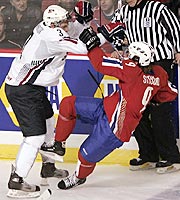 Jack Johnson and Michigan play North Dakota and then probably Minnesota on their side of the bracket, so it’s likely that they’ll lose by the 25th and then he’ll either join the team on the road or they may have him wait and open with the team at home on April 1st. I’m not as excited about this guy as other Kings fans are (meaning that I don’t get weak-kneed every time his name is mentioned), but he sounds like a guy who can be an anchor on the blue line for a couple years to come. With him, Blake, and Brown, the Kings should be a team to be feared come next season. The Kings may not want to sign him for all sorts of weird CBA issues, but I think they might just because of the publicity.

The Kings get a blast from the recent past tonight when they play the Dallas Stars. Mattias Norstrom is expected to play tonight for the first time against his old team. (The Kings played the Stars once before after the trade, but Norstrom was recovering from an injury.)


At first, I was glad that the Kings traded Norstrom; from a salary cap perspective, it was a good move, and I always thought Norstrom had gone from being underrated earlier in his career to overrated now. Still, I love that guy. If there was one player in the NHL who could be transported back to the 10th century and totally fit in, it would be Norstrom. This is a guy who once spent his off-season building a deck back at his home in Sweden. (Meanwhile, I can’t even make toast without losing my eyebrows.) For some reason, I find that endearing. On the ice, I liked Norstrom because he was not a dirty player at all but was unafraid to give a guy the business if he did something dickish.


I’m not going to be able to see the game tonight. Ordinarily I'd be pissed, but this is the first time I can remember where I don’t really want to watch a game because I don’t think I could handle seeing Norstrom wearing a Stars jersey. I mean, the Stars? I guess that makes them my favorite Pacific division team besides the Kings, but I’m not happy about it.

Oh, and I also heard that there's going to be a guy in a Guinness shirt at the game who threatened to kill Anze Kopitar, so any Kings fan who sees him should attack.