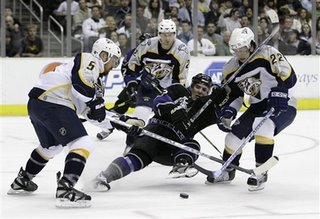 The Kings are going into an important week, with games against Central powerhouses Chicago and Columbus. The Kings trail Chicago by 3 points for last in the Western Conference and have been playing good hockey of late (last games' ineptitude on the penalty kill aside). Obviously, this is a terrible development and must be stopped. The only motivation I have to withstand this season is to think ahead to the NHL Draft, when the Kings should have a high pick. If they keep winning, they’re going to take that away from me, and I wont’ stand for that. This would make sense, though, given the Kings’ history. The previous two seasons saw the Kings needing to win to get into the playoffs, but they instead went on horrific losing streaks. This year, when they need to lose, they start winning. It really can make you laugh. No wait, not laugh, sob uncontrollably. They shouldn’t have to worry about winning today, though, with Kopitar out with the same upper body muscle strain (he’s expected to miss the entire upcoming 4-game road trip) and with no word on whether Lubomir Visnovsky will play. But don’t worry, Chicago fans, you’ll still get to see Jamie Heward! Wait, this is Chicago, they don’t have fans.

Chicago is actually not as bad as their record suggests. They have Martin Havlat, and Nikolai Khabibulin, and… nevermind, they’re terrible. Seriously, how sad is it that this is what the Blackhawks have been reduced to? I don’t even know enough about them to make fun of them. Damn you, Bill Wirtz. I’d also like to point out that more people in L.A. are going to be able to watch the game than people in Chicago thanks to Wirtz, because he thinks that not letting people watch games on TV will inspire them to go in person. Other items on Bill Wirtz’ list of good ideas: bigger nets, white people dancing, and alchemy.

Prediction: I'm going to go out on a limb and say that someone will fall down.