Kings Gameday: These are the Times that Try Men's Souls

Share All sharing options for: Kings Gameday: These are the Times that Try Men's Souls 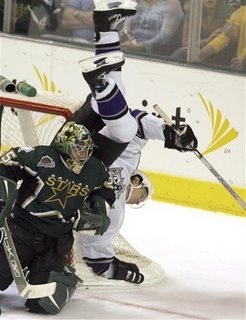 
I’ve been away from internet and a TV that got Kings’ games the past couple of days. I was mad that I missed the last three games, but apparently I should be glad since the Kings have lost the last three in overtime. There is nothing I hate more than an overtime loss. I went to a game against Edmonton earlier in the year where the Kings lost in overtime. The conversation the ride home consisted of me and my brother muttering, "Mother fucker… son of a bitch… I mean, DAMMIT." The problem with an overtime loss is that you don’t have time to reconcile the fact that your team is going to lose. If they’re down by two you can rationalize the loss or at least come to terms with it. Once the game goes into overtime, though, you can’t help but be optimistic. Then all of a sudden the red light’s on and you have to leave. I don’t think the shootout helps either, because in the back of your mind you’re thinking, "Hell yeah, I’m going to get to see a shootout." Even worse is the fact that the Kings are continuing their tradition of not losing properly. Lose by 3 goals a game if you’re going to lose, you bastards, and stop picking up points!


The Kings are playing the Edmonton Oilers tonight. The Oilers are the only team in the Western Conference who have more reason to be depressed right now than the Kings. They’ve lost seven games in a row- that’s insane- and recently traded away their big-nosed heart, Ryan Smyth. I feel bad for them (my relatives on one side of the family are from Edmonton), but at the same time it makes me giddy. With apologies to the good people of Edmonton (and especially to my mom), I don’t really like the Canadian teams and Edmonton in particular; the Oilers somehow manage to give off the haughty "We’re Canadian so we play real hockey" vibe while still trying to play the scrappy underdog card. I’m not sure what Oilers fans should be more embarrassed about: the fact that people whined so much when Ryan Smyth got traded or that they cared about a dopey-looking dude like him in the first place. Plus, I hate Joffrey Lupul from his Anaheim days, but I guess I’d almost feel bad about kicking him while he’s down. Almost.