Kings Gameday: This is Going to be a Long Week

Share All sharing options for: Kings Gameday: This is Going to be a Long Week 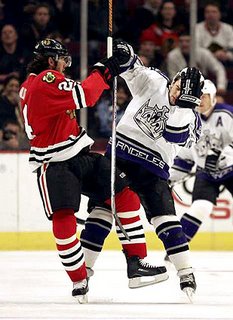 4:00 PM, FSN Prime Ticket
I said yesterday that I want the Kings to start losing because I want a high draft pick in June. This is half-true. Rationally, I want the Kings to do poorly because there’s no chance they can win the Stanley Cup this year. Emotionally, however, I hate it when the Kings lose. It ruins my day. Even worse is when I only get to watch the 1st period and see the Blackhawks score 15 seconds into the game. There was a post the other day by much more intelligent and famous blogger, The Mighty MJD, who wrote that he can’t cheer against his team because he roots for the individuals on the team as well as the jersey. I’m much the same way. I can’t cheer when Patrick O’Sullivan fans on a shot (like he did in the first period), or boo when Raitis Ivanans actually makes a smart play to get the puck to O’Sullivan in the first place. It’s hard to find a balance; I want the Kings to be bad, but I want everyone on the team to do well. It was a lot easier when the Kings had Cloutier, because I could hope the Kings scored 4 goals a game while still expecting them to lose. The Kings played last night without Blake, Visnovsky, and Kopitar; their top defenseman was Aaron Miller and their top center was Alex Frolov (whose natural position is left wing). If this continues to be the case, I’m not going to be happy for the rest of the week.

Tonight’s opponent is the Columbus Blue Jackets. I feel bad for the Blue Jackets; all the other expansion teams from the mid-90s on have become legitimate NHL teams (the Thrashers are exciting, the Wild went to the Stanley Cup Finals a year ago, the Hurricanes just won a Cup), but the Jackets are still as terrible as they used to be. I don’t know what’s up with their franchise, but I then again I don’t pay too much attention to them. In all honesty, I would prefer that they stay terrible so I don’t have to bother thinking about them. When someone asks me about the Blue Jackets the first thing I think of is that Frolov deserved to go to the All-Star game over Rick Nash. Then I think of Ken Hitchcock slipping on ice and it makes me laugh. (He’s fat, get it? Oh, and he also looks like an older version of Paul Bearer, The Undertaker’s old manager.)

The last time these two teams played, the Kings won 3-0. Mike Cammalleri scored his first goal in almost two weeks in that game; since then, he has 34 points in the last 24 games. With all the (well-deserved) praise directed towards Kopitar and Frolov, don’t leave out Cammalleri. He’s often derided because he’s too small and not fast, but the guy is a good hockey player. I would be pretty pissed if the Kings traded away a 24 year-old point-per-game player this off-season because they don’t feel he’s worth $4 million a year. Signing him is more important to me than signing a guy like Drury or Gomez, because they’ll be on the decline, while Cammalleri is likely to only get better.


Prediction: Ineptitude. Oh, and I think that either Brown or O’Sullivan is due.