Share All sharing options for: Kings Gameday: Who Needs Kopitar? 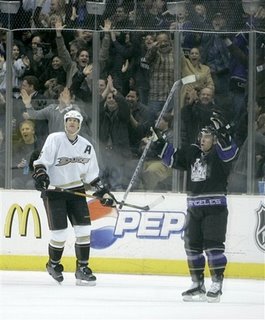 
The Kings are riding some what of a hot streak (for them, anyway), gaining points in 10 in their last 11 games, including a victory against the Ducks on Thursday. Coach Marc Crawford confused the Ducks by using a line-up system that is best described as a clusterfuck; Raitis Ivanans had a goal and played 11 minutes! Seriously, though, I could not understand what the hell was going on with the lines. I’m pretty sure Visnovsky played 61 minutes. (He had to take 2 minutes to heal a broken ankle bone during overtime.) The whole game was weird: Frolov outskated Scott Neidermayer on the way to a breakaway goal and Dustin Brown actually played better with Kopitar out of the line-up. The Kings are going to be hard-pressed to repeat that performance against a team that actually had the stones to make a move at the deadline, though.
Meanwhile, went out and got Peter Forsberg, solidifying them as my least favorite team in the NHL. [I mean, at least has George Parros’s moustache. (And yes, I use the English spelling of "moustache." Also, I use brackets.)] There’s Forsberg, who somehow has the reputation as a tough guy even though he sits out games he doesn’t think are important; there’s Martin Erat, who dared try and check Kopitar the last time the Predators played the Kings (Brown had to show him what’s what, below); Jason Arnott, who has a stupid face; Jordin Tootoo, who has a reputation for taking runs at people; and Darcy Hordichuk, who jumped Sean Avery from behind last year because Avery had the nerve to check Paul Kariya.
Oh yeah, Paul Kariya. Oh, how I loathe Paul Kariya. He constantly skates with his head down and yet acts surprised when he gets steamrolled by a guy playing, you know, hockey. The son of a bitch also earned my ire because he screwed over the Ducks. (Even though it was the Ducks, there are some things that are just not done; I mean,at least when Blake left he took a deal that was comparable to the one the Kings offered.) Remember when Scott Stevens elbowed Paul Kariya in the head? That was my screensaver for a while. The only part of that whole exchange I regret is that Kariya eventually got up. I hate you Paul Kariya and I hope you burn in Hell.
Oh yeah, and the Predators have silver on their jerseys. What’s up with that?

My Prediction: At least one Kings fan will mutter, "Who the hell is Shay Stephenson?"