A lot of my enjoyment as a hockey fan comes from hating other teams; I’ve probably spent more time in my life thinking about how much I hate the Ducks than I’ve thought about math. I have a horrible confession to make, however. It's my secret shame that I have kept hidden for years until now. There’s a team up north who I can’t quite bring myself to hate: the San Jose Sharks.

The problem with the Sharks is that they’re the type of team I’d cheer for if I weren’t a Kings fan. They don’t take many penalties (they’re 26th in that department so far this year), they’re all big, fast and young, and they have a fanbase that seems to genuinely care about the team. They have gotten good over the years through smart drafting (way to go, Lombardi) and key trades when they presented themselves. They've never really done anything wrong as an organization except boo the Canadian national anthem last year, but it could be argued that Edmonton started it. The only real beef I have with the Sharks is that they got rid of the Cleveland Barons (their old AHL affiliate) and their adorable aristoshark in favor of an affiliate in Worcester. 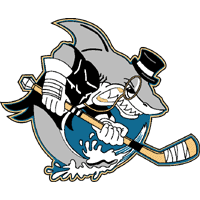 Even the players are somewhat likeable. I’ve always liked Joe Thornton for three reasons: one, he is probably the most unselfish player in the NHL; two, he seems like a funny guy in private (his interview along with Scott Thornton earlier this year was hilarious); and third, he has been denounced his entire career as a choker by the insane people of . (He only has 104 points this season; I’m sure none of them were clutch.) It wouldn’t be fair to hate Patrick Marleau in the same way it would be unfair to hate a robot (besides, he’s friends with Kelly Hrudey), and I only really hate Jonathan Cheechoo because I have to hear how much he likes to eat moose every playoffs. The only person in the organization I don’t like is Ron Wilson, and that’s more because he used to be the Ducks’ coach than anything else. 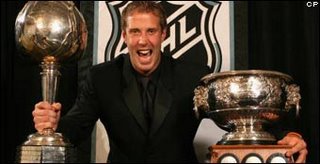 If anyone has a reason they hate the Sharks (other than their jerseys are teal), put them in the comments. This may not seem like a big deal to some, but it’s infuriating for me. I love making fun of other teams; I’d rather make fun of Alexei Yashin’s turtleneck than play with a litter of puppies. Sure, I can make jokes about Mark Bell being a drunk or Scott Hannan looking like a hobbit, but it’s not the same old-fashioned hate I get when I see Corey Perry or Matthew Barnaby. Damn those Sharks; I hate them so much because I can’t help but like them.

Prediction: The Sharks will win and I’ll grudgingly give them respect. Those bastards.