Quick note: I know it's The Battle of California, but let's face it: the Dallas Stars are pretty damn relevant to the BoC. Really, the Pacific Division is basically BoC + Stars (yes, that means I'm completely disregarding the Coyotes).

Since we have Rudy Kelly writing some great day-to-day Kings stuff and I live in the Dallas area, it occurred to me that some Stars coverage seems reasonable. As you can see from the Jack Johnson post, I'll still write some Kings stuff from time to time. That being said, for an undetermined amount of time I'll be supplying some Stars stuff.

Keep in mind a few things: 1. I'm not a Stars fan. I don't hate them (always) but I think they're pretty boring (almost always); 2. I know quite a bit about the Stars, but by no means am I a comprehensive source of Stars knowledge. 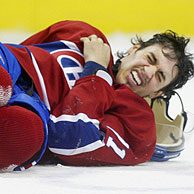 Anyway, consider this my first post as a Stars correspondent, although I've written things already, including a hastily drawn analogy between Peyton Manning and Marty Turco...
When most hockey fans think of Mike Ribeiro, they picture a famous scene from a Montreal Canadiens playoff game. After taking some penalty-worthy blow, Ribeiro was seen writhing on the ice in pain...only to come up smiling.

Despite his talent, there was probably more talk about his Razzie-award worthy performance than any feats of playoff dominance. His career playoff totals are pretty abysmal:

17 Games, 2 goals, 3 assists and 18 PIM, according to hockeydb.com. No Cups and some embarrassing moments of inspired diving and writhing.

So, naturally, when I heard of the trade that sent him to Dallas, I had a few hearty snickers. Not only was the notorious Ribeiro involved in the trade, but so was Janne Niinimaa, whose claim to fame rests in his atrocious defensive responsibility and amusing tendency to take emo team photos.

The trade seemed like one of the most common in the NHL: exchanging a headache for a cancer. (Hey, Rib, at least you're not a cancer...right?)

Anyway, there wasn't much that changed my mind at first, especially not when a graphic artist I was talking to referred to Ribeiro as "Mr. Fancy Pants." But we'll let that one slide.

That being said, there's been a decided change in the play of Ribeiro, especially lately. In the last 10 games, he scored 11 pts (6 Goals, 5 assists) and 2 of his 3 GWGs. In the last two games against the admittedly irrelevant Coyotes, he scored 6 points.

His improvement is showing up on the scoresheet, but the best thing for the Stars is that he's consistently been a force on the ice. His blend of playmaking and sublime stickhandling is elevating his game to the playoff-friendly "DearGodjusthookhimandgetitoverwith" level.

Could MR FP end up groaning and writhing his way to another piss-poor playoff run, especially on the postseason-ally challenged Stars? It's a strong possibility. Still, with the rejuvenation of Ribeiro and the acquistion of Ladislav Nagy, the Stars finally have some scoring depth beyond American Hero Mike Modano.

The Stars postseason dreams don't just lie on the shoulders of Turco and Modano.

And on that note, let me leave you with this shameless photo from www.dallasstars.com: 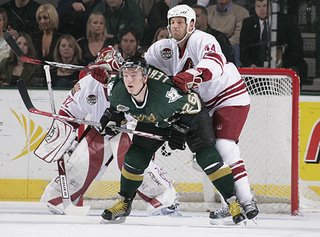