V for Vendetta—Who’s the hungriest for roast Duck this spring?

Share All sharing options for: V for Vendetta—Who’s the hungriest for roast Duck this spring?

I’ve alluded to it before, but there’s at least four teams out west that have a pretty compelling tale of revenge against the once-Mighty Ducks for past-playoff upsets. Here’s a brief look at how those series went down, and why the west looks to be a minefield of vengeance for the Ducks this spring.

Detroit Red Wings
Last playoff matchup: 2003 playoffs, 1st round, (2) DET vs. (7) ANA
Result: 4-0 Ducks. Anaheim becomes the first team in NHL history to sweep a defending Stanley Cup champion. Game 1 in Detroit is especially significant, as Paul Kariya beats CuJo early in the third overtime period, wherein J.S. Giguere becomes the first goaltender to make 60+ saves in his playoff debut and the first goaltender ever to make 20 saves in one OT period. This really begins the playoff legend of Jiggy, as the Ducks are outshot all four games but manage four one-goal wins. Detroit, incidentally, had not lost three games in a row all season.
Key player: GIGUERE 4-0, 6 GA on 171 shots in more than 290 minutes of action, 1.24 GAA, .964 Sv%.

Dallas Stars
Last playoff matchup: 2003 playoffs, 2nd round, (1) DAL vs. (7) ANA
Result: 4-2 Ducks. Another huge upset, as Dallas was the top seed in the west. Again, the series started with a long G1 victory, as Petr Sykora finally beat Turco early in the 5th overtime period—this gave J.S. Giguere another postseason accolade, as he became the first goaltender ever to have two 60-save performances in one playoff year (for reference, Patrick Roy is the only other goaltender to have two 60-save performances in his career!). Two major "clutch" statistics for the Ducks in this series? (a) in all four wins, the Ducks score the winning goal on their final shot of the game, (b) in all six games of the series, the Dallas Stars were tied or ahead with 2 minutes left in regulation.
Key player: GIGUERE 4-2, 13 GA on 202 shots in more than 422 minutes of action, 1.85 GAA, .936 Sv%

Minnesota Wild
Last playoff matchup: 2003 playoffs, 3rd round, (6) MIN vs. (7) ANA
Result: 4-0 Ducks in the Cinderella v. Cinderella matchup. Of course, this is the most one-sided sweep in NHL history, as the Wild only managed to score ONE GOAL over the course of these four games. As was a common theme in those playoffs, again the Ducks started with a multi-overtime game one, this time again won by Sykora midway through the 2nd overtime period. And while Minnesota was not a scoring juggernaut by any means, bear in mind that they scored 26 goals on 149 shots in their previous 7-game series with Vancouver.
Key player: GIGUERE 4-0, 1 GA on 123 shots in more than 268 minutes of action, 0.22 GAA, .992 Sv%

Calgary Flames
Last playoff matchup: 2006 playoffs, 1st round, (3) CGY vs. (6) ANA
Result: 4-3 Ducks, beating the defending western conference champions. This was a much different story than any of the other series, because J.S. Giguere went from playoff-god to playoff-god-awful (though to be fair, he was playing through injury); this series instead became the emergence of Ilya Bryzgalov. Consider this: in this series, Giguere surrendered 13 goals in 201 minutes, compared to Breezy surrendering only 3 goals in 225 minutes. Calgary’s power play was 6-for-28 against Giguere and 0-for-15 against Bryzgalov. Considering how much offense Giguere provided the Flames, it’s amazing that the Ducks still came out on top—but the real story has to be Calgary blowing a 3-2 series lead, especially since that’s how they had ended their previous postseason with Tampa. Actually, Calgary is the only team on this list to have ever had a series lead on the Ducks, and they blew all three series leads they had.
Key player: BRYZGALOV 2-1, 3 GA on 93 shots in more than 225 minutes of action, 0.80 GAA, .968 Sv%

I’m not really going to add Colorado to this list as their playoff hopes are nearly shot, but they were also pretty embarrassingly swept by the Ducks last spring as well, shut out the first two games and outscored in the series by Joffrey Lupul himself 6-4. (Oh, just because it's impressive: BRYZGALOV 4-0, 4 GA on 121 shots in more than 256 minutes of action, 0.94 GAA, .967 Sv%)

Just for perspective, look at how well the opposing goaltenders did that got beaten by the Ducks:

These aren’t bad playoff numbers at all. Almost a shame they had to run into the hottest goaltender of that year’s playoffs.

So, based on what you’ve seen above, what is the worst way to lose to the underdog Mighty Ducks? Which of these series losses hurt the most, and who’s got the biggest appetite for roast Duck this spring? 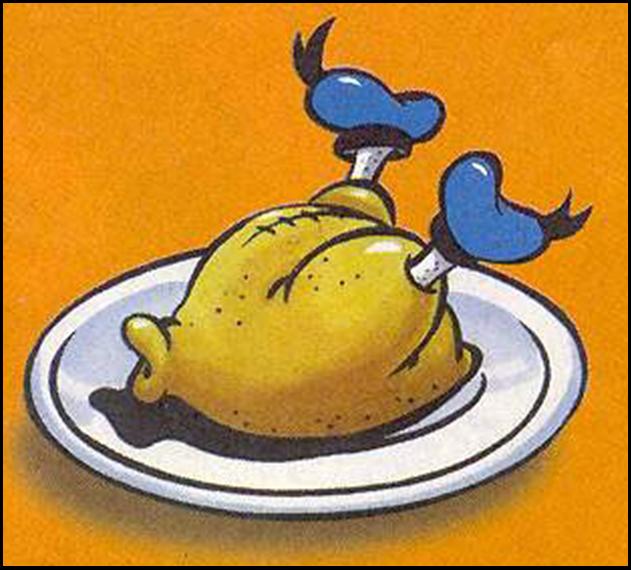