Share All sharing options for: ANA / MIN review: Forget the Selke, let’s give Pahlsson the Smythe! 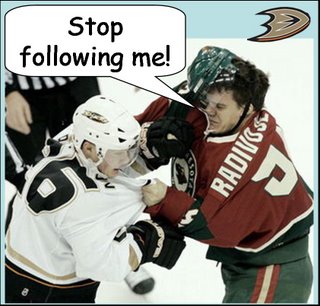 With round two starting tomorrow, I doubt I’ll have time to properly recap the first round victory over the Wild (yet another instance of California dominating Minnesota), but I do want to take a stab at answering the question of who the real stars of the series were. To be fair, you can make a case for a lot of Anaheim players here:
But digging deep into the round one numbers, I gotta say the heroes of round one were definitely the stopper line of Sammy Pahlsson, Rob Niedermayer, and Travis Moen.

You see, there’s two things to keep track of when trying to evaluate the performance of a line: the first obvious one is production, both in goals-for and goals-against. Most people do alright in eyeballing those ‘counting’ stats, and can see who is producing and preventing goals. The second is trickier, but probably just as important, and that is context: who are lines playing against, and what the expected outcome from such a match-up?

Hey, maybe this is the postseason people start noticing that Samuel Pahlsson is one of the top two or three defensive forwards in hockey. Not only did Sammy play a big role in containing Marian Gaborik and Pavol Demitra, he also chipped in three assists.

This line was unbelievable in round one, totaling 2 goals and 5 assists while frustrating the hell out of the Wild’s dual Slovak threat. (Selanne / McDonald / Kunitz, by comparison, totaled 2 goals and 1 assist in the series, while playing against much less productive players).

Pahlsson in particular was a standout. Using IOF’s H2H ice time site, Pahlsson was on the ice for 63% of Gaborik’s 5-on-5 ice time and 64% of Demitra’s. In addition to that impressive even-strength duty, he also led all Ducks in penalty-killing time (27:35, 55% of Anaheim’s total shorthanded time), in which the Wild managed to score zero PP goals. Remember, the Wild had the sixth-best power play in the league over the course of the regular season.

In the 5-game series, Sammy led all Ducks with 16 hits (twice as much as any of his teammates) and 58 faceoff wins (27 more than any of his teammates). And hell, even when Coach Carlyle ran out of players to put on his power play in a penalty-heavy G2, he threw Sammy, Rob, and Travis out and they managed to produce a faceoff goal almost immediately.

In terms of goal-differential, Pahlsson in the series was on the ice for 4 goals-for, and only 2 goals-against (all situations). Considering the opposition he had to go against was generally the Wild’s top line or even worse, their power play, those are astounding numbers. No wonder Coach Carlyle hasn’t split this line up in any one of the 87 games to-date (an unbelievable stat for that trio, really—zero games missed to injury and zero games split up in line-shuffling).