Brad May: Do I really have to root for this a$$hole?

Share All sharing options for: Brad May: Do I really have to root for this a$$hole?

As this series shifts to Vancouver, so with it comes the winds of May…Brad May, that is. May is eligible to return to play for Anaheim after serving his three-game suspension for the uncalled-for suckerpunch of Minnesota defenseman and minutes-leader Kim Johnsson.

Now I have been very critical of the NHL’s light punishment in this matter—three games was the shortest sentence available to avoid a Boogaard retaliation—but in the NHL’s defense, it was a punch that hardly anyone saw or had footage of; there just haven't been many good pictures of the actual attack. There was a multi-player scrum going on right in front of the benches, and it wasn’t until the cameras zoomed out again that the injured Johnsson (who did not play again in the series) was noticed lying on the ice. Watching the game, none of the TV replays seemed to be able to locate or isolate the suckerpunch, so the NHL may have been going on testimony rather than on hard evidence.

Well, I’ve found some shots that I think people need to see; most of these shots come from a reader submission on the Minnesota Star Tribune’s Wild blog, and in my mind are among the few pieces of actual evidence of May’s crime. I do not believe that the NHL had evidence like this when making its decision, and I don’t think many hockey fans have seen what actually happened. 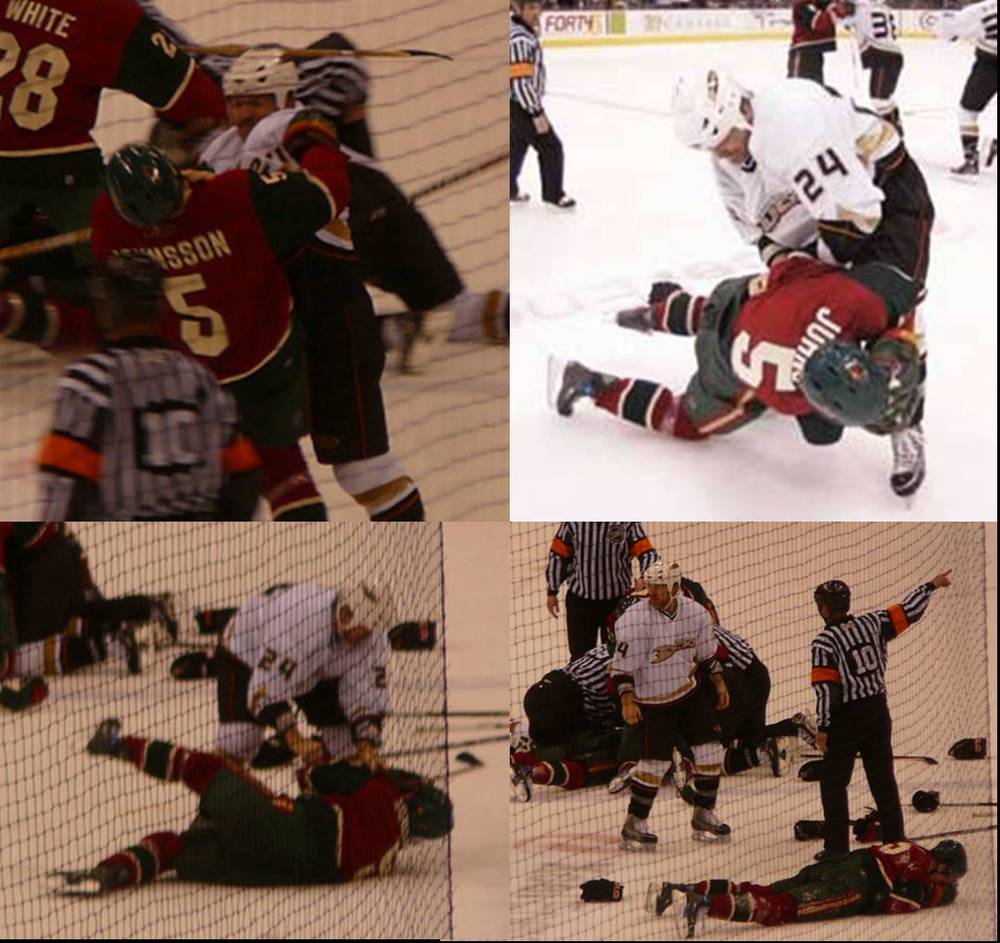 Obviously as a Ducks fan, I have a huge moral dilemma here. As a hockey fan (or even as a human being) this is a tough act to forgive or overlook—to ruthlessly attack and injure a career non-fighter with a concussion history—it goes against every notion of the 'code', and obviously the NHL’s 3-game punishment does not do justice to the crime committed.

But having said that, the fact that May deserves a stiffer punishment does not make him any less available going into G3. I think he is among the Ducks’ top-12 forwards at this point in time, and if he does dress, it’s going to be awfully tough for me not to root for him—I still want the Ducks to win, after all.

So I guess I’d like some input on my inner debate here: the question is not so much "Does Brad May deserve a longer suspension?" because the answer is a pretty easy "Yes." But rather, now that May has served his insufficient suspension, what next? Should the Ducks dress him? And if so, how do I cheer for him?

No matter what, I refuse to hide the evidence. Everyone really ought to know: Brad May is a gutless puke of a thug. The Ducks may be able to use him towards a cup run, but other than his contributions toward that, I hate him.

Comment away, people. Let’s find a way to get the Brad Mays out of the game.