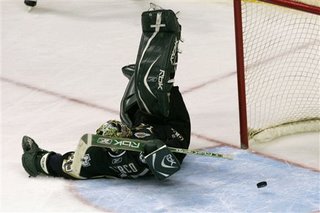 Wow. Last night's game was just a kick in the nuts.

Reading today's Dallas Morning News didn't exactly soothe anything either. The Turco-Tippett era seems downright jinxed. It's really just a matter of what we want to call it. The Newy Curse? Maybe the Belfour Hangover?

Just reading some of the quotes and statistics, it looks pretty bad for the how-the-hell-are-we-down-3-1 Stars.

This year's choke job cannot be placed on everyone's favorite scapegoat in leg pads, Marty Turco. So far in 4 games, the Canucks have outscored the Stars 9-8 and managed to take a 3-1 lead back to Vancouver.

It all could be tied up if Mike Ribeiro's near-goal scooted a mere inch or two further before former Star Willie Mitchell propelled it from the net. It was one of those situations where I looked away to discuss the greatness of the goal (I think my exact words, after saying that Modano, Ribeiro and Co. needed to step their games up, were "Speak of the devil!") before watching in slack jawed horror that it didn't count. And it was a good call. Good lord.

It's strange. I've never really enjoyed watching the Stars until this season. Yet even though they've played oftentimes captivating hockey, it's the same old song and dance.

The Stars are an aging team and Turco's contract numbers are big. That being said, he's not at fault. Hell, he's only allowed 9 goals in the equivalent of 5 games (my expert math says that's a sub-2.00 GAA). Turco's the caliber of goalie that can keep the Stars in the playoff mix for years to come, so it's finally time to ask some uncomfortable questions.

The question, sadly, is about American Hero Mike Modano, former perennial Selke candidate Jere Lehtinen and even captain Brendan Morrow. These guys haven't produced those crucial points. You know a team's desperate when you find yourself missing Eric Lindros.

It's hard to argue with a team that seems mostly well-run and well-coached, but at some point this team has to make a deep playoff run or make some significant changes. I don't know how long they can wait, because the clock is ticking on Modano, Zubov and these Stars.

On that DMN spread, Modano said that this year's playoffs are starting to look a lot like last year. If this core group is worth keeping around, they'll at least make this thing interesting.

Three 1-goal losses show that they're not getting blown out of the water, but we'll see how much heart the Stars have come Thursday. 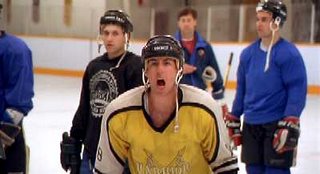 P.S. Here's a number to make Java Geek beam: the Stars missed the net 19 times in Game 4. Maybe Boothe Laser Eye Center, which advertises heavily in Dallas, needs to give the Stars a group discount for 20/20 vision. They're shooting like Happy Gilmores out there.