(Hey guys. Earl’s out doing something less important than playoff hockey, so I’m covering for him. Now, I don’t like you and you don’t like me, but for the sake of the site I’m going to try and be a Ducks fan. I’ll try not to use any big words.)

Derek Boogaard is probably the scariest man in the NHL. I get the same feeling watching him that I used to get whenever the general in with the skull helmet came on the screen when I was a kid. He destroyed the Ducks last game; it was like that scene in Lord of the Rings when the cave troll shows up. (Wow, Willow and Lord of the Rings? I'm quite the catch!) He played game 4 with a rage that I’d never seen before, a rage that has definitely not subsided after Brad May’s sucker punch. May was "suspended" (I think of it more as a stay of execution), but I imagine that Boogaard will be ready to kill someone (if I were Ryan Getzlaf, I’d develop a cold real quick). There’s only one guy on the Ducks who can possibly stand up to Boogaard and match his size: George Parros. 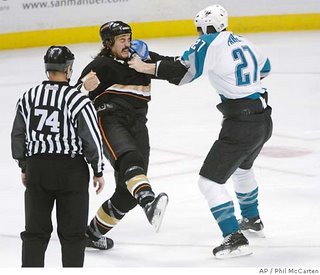 I love George Parros ( in fights this year according to hockeyfights.com), but I’ve never really considered him a great fighter. He loses his balance too much and lets guys much smaller than him throw him around. Boogaard’s (8-2) main strategy is to get a guy off balance to where they can’t defend themselves and then pummel them. He’s already broken the face of one Duck this season and I doubt that Boogaard has respect for Parros.


This is a match-up that could really determine Parros’ place in the NHL. Sure, he beats on guys like Darcy Hordichuk and Cam Janssen, but Parros is not yet in the class of Donald Brashear, George Laraque, or Boogard. This game could change all that. To win, however, George is giong to have to fight angry. He needs the match Boogaard's insanity and really let loose. Can he do it? I don't know. We all love Parros, but eventually he is going to have to start winning bouts against guys his own size if he wants to take his place as one of the elite fighters in the NHL.
I don’t know if Parros and Boogaard are actually going to fight tonight; hell, Parros might not even play. I do know that they need to fight, for the sake of their teams. If they fight, I’m expecting nothing less than complete mayhem. I'm talking a building-collapsing, teeth-gnashing, horrifying type of fight. The kind of fight that you initially find awesome, but then realize halfway through that these two men are trying to kill each other. And then it's really, really awesome.

The Wild are desperate and angry after the May punch; the Ducks are in danger of losing the physical advantage they’ve spent all season establishing. Let’s go George; prove you deserve a place in the NHL.