Ducks Gameday—Do monkeys hate webbed feet? and other such nonsense

Share All sharing options for: Ducks Gameday—Do monkeys hate webbed feet? and other such nonsense 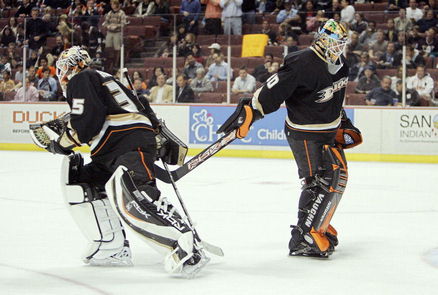 What do you do as a fan when you get to game one of the playoffs, and all of a sudden your team's backup goalie skates out for a surprise start? I suppose you just suck it up and take it.

What do you do when it happens two years in a row?

Watch out, Coach Carlyle; I’m on to you. I’ll be ready for this surprise stunt next year.

Thankfully, the Ducks employ a very capable (if not insane) backup in Ilya Bryzgalov, whose career postseason numbers now sit at 7-4 with 3 shutouts, a 1.41 GAA, and a .945 sv%. For those of you scoring at home, those numbers are in fact better than the numbers J.S. Giguere put up during his Conn Smythe year (1.62 GAA, .945 sv%), though it is important to note that JSG faced more dominant teams with a lesser squad in front of him.

I'd guess based on G1 that Breezy continues to play, but I've been wrong before. Just two days ago, in fact.


Back in 2003, the second-biggest instant celebrity to JSG was Maggie the monkey, a zoological wonder who was able to predict playoff series results with much greater accuracy than any of the TSN 'experts'. As I recall, they would lay two team logos out in front of her, and she would somehow select one of them as her pick, and lo and behold she was quite often right. She got really famous by siding with the Mighty Ducks as they shocked the world by beating 2-seed Detroit and 1-seed Dallas en route to a SCF loss. I haven’t followed her that much since then, but I think she’s got a decent record in years since. 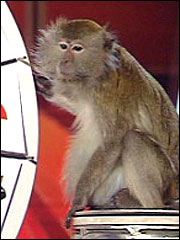 I really thought that Maggie’s fondness for the MD logo was purely graphical—somehow that Disney duck mask captured Maggie’s attention, so this year I was particularly curious how she would react to a new, grown-up webbed-foot-logo re-design. Well this year (for the first time I can recall) Maggie finally picked against the Ducks, which depressed me more than it should have. But then I noticed the picture:

I don’t know when this started, but Maggie’s not picking a thing—instead she’s operating a wheel-of-fortune that's making up her picks. Sorry, but I think that’s bullshit. As soon as you make decisions by spinning a wheel, you’ve taken the monkey out of the equation—I doubt Bob McKenzie or Darren Dreger are waiting their turns on the spinwheel.

Listen, I’ve never really been one for animal activism, but dammit, let's let the damn monkey maker her own choices! Isn't that really what that gimmick is supposed to be?


The Ducks have been very considerate over the past couple of years not to keep their home fans out too late--multiple OT games are nice and all, but they have their place (hint: the road). Here are the last 10 playoff OT games the Ducks have played, sorted by amount of overtime.

The 5 longest OT games in this stretch were all played on the road; all home OT games were settled in the first seven minutes. Oh by the way, that's a 9-1 OT record. Strange how our playoff OT record bears zero resemblance to our regular-season OT record.

p.s. Happy Friday the 13th. Dare I add to the jinx by mentioning that the Ducks have never lost a series in which it has won at least one of the first two games?