Before I get into Stars-Canucks talk, let me say, if Jon Cheechoo really is only "day-to-day," then the NHL needs to set up some kind of Player Who Had the Best Playoff Series While Horribly Injured Trophy.

A few ideas on such an award:

Even though the injury actually kept him out of the playoffs, they could hand out Peter Forsberg's ruptured spleen, which I assume is currently preserved in a jar somewhere in Sweden. Just imagine the "Stanley Cup at the bottom of Mario Lemieux's pool" type stories that could come from that one. 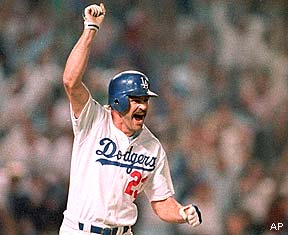 Since even the most astute hockey fans cannot fondly remember superstars of yore such as Mr. Vezina, the NHL could also go the Kirk Gibson Trophy route, since he famously hit a home run in the 1988 World Series against a Hall of Fame closer who had a Hall of Fame moustache even though he could barely run around the bases.

If all else fails, they could always hand out a crutch made of solid gold.

All joking aside, that was a sickening collision. I cannot say if it was dirty or not, but I can say for sure that I'm glad I'm not Scott Hartnell for the next, oh, two weeks or so. Either way, Cheechoo will deserve oodles of respect if he returns during this year's playoffs and a spleen in a jar if he makes it back to play another shift against the Predators. Forsberg could even be on hand to pass it to Cheech, which I guess would be Hannibal Lecter's answer to the green jacket ceremony at the Master's.

OK, that went on too long. Let's move along now...

Due to my work schedule, I was only able to see about "half" of the Stars-Canucks game. This, of course, means that I watched three periods of play. After watching those periods alone [since I had to drive home after the third OT, I didn't witness a single goal during real time] I took away a few things:

1. The Stars greatly outclassed the offensively stunted Canucks, as anyone who watched the game could see.

2. Though he might be sloppy every now and then, Roberto Luongo is the real deal.

4. The Stars might somehow win the series after that monumental kick to the groin, but I know this much: fighting back in this series will take so much out of them that winning the Cup might already be a pipe dream.

5. People in the sports media love to complain about big-OT games, as if to say: "Yes, we actually hate our jobs. So what?"

Still, I have to give kudos to the local, quite heralded Ralph Strangis-Darryl Reaugh broadcast team for waiting at least 3 OTs for the "there's sure a lot of overtime" jokes to creep in. Then again, it's not like those guys haven't announced marathon games before (some might remember an 80-minute game against the Ducks and a Cup-clinching marathon against the Sabres).

6. Stu Barnes has to be the Claude Lemieux of playoff OT. He hit a post and just seems to have a knack for scoring those gigantic goals. I'm sure he would have gotten a goal by the 6th OT.

I saw a neat little Sports Illustrated info graphic where they listed 5 star players who usually improve their goal outputs significantly during the playoffs.

In fact, it made me think up a seemingly impossible job for a stat nut. I challenge a hockey stat savant to dig up compelling numbers on players who score an absurdly disproportionate amount of playoff OT points compared to their normal output. (Steve Ott would probably have an unfair advantage since he scored that OT GWG against Colorado in the Stars' last pre-lockout playoff W)

At first I thought the Stars might be screwed, since coming back from a road multi-OT loss is about as deflating as it gets. Still, the silver lining is that the Stars should have won that game. So there's hope. But like Cheechoo's knee, you can't say it doesn't hurt.