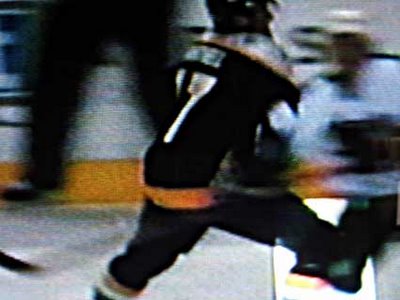 Nine minutes into the second period of the Sharks 5-4 double OT win over the Nashville Predators, right wing Scott Hartnell took out San Jose's leading scorer with a knee-on-knee hit, and an elbow to the head, on the same play.

Intentional? Of course not, just a hard working effort to skate through an opposing player, even after he no longer had the puck. Just like hitting a tennis ball. Intent to injure? Bleep no. His knee and face just happened to be in the wrong place at the wrong time. The fact that no one in the NHL has been able to stop the Thornton-Cheechoo tandem the last month also has nothing to do with it.

The injury did shine a spotlight on a major question mark for the Sharks. San Jose has the depth to bring in quality players, with center Joe Pavelski and agitator Mark Smith in reserve, but the hit on Cheechoo seemed to shake off a lot of the confidence the Sharks spent the last month and a half building. They need Rivet and Guerin, and Brown/Grier to step in and provide leadership when they feel the momentum start to swing. That momentum carried San Jose out of the playoffs in 4 games against Edmonton last year.

More on the Cheechoo hit here.