The Quack and the Dead

Share All sharing options for: The Quack and the Dead

I was watching The Quick and the Dead the other day and noticed that the characters in it resembled many of this year’s playoff contenders. (Well, not really, but you try writing something when your team isn’t playing. Dick.) If you haven’t seen The Quick and the Dead, it concerns a quick-draw tournament lorded over by the fastest gun in the West, John Herod (played to pants-soiling effect by Gene Hackman). There’s an assortment of law-breakers, vagabonds, and ruffians, along with a reformed gunslinger (Russell Crowe) and a mysterious stranger called "The Lady" out for revenge (Sharon Stone). Will the heroine be able to beat Herod at his own game? Well, yes. Sorry if I spoiled the movie, but come on, it came out like 12 years ago. Anyway, here's a selection of characters from the movie and the team that most closely resembles them. 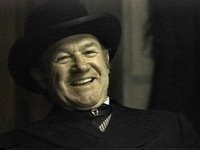 Herod ran the town of Redemption, Arizona with an iron fist. Nobody likes him, but everyone fears him. He is so without conscience that he murders his own son in the tournament and then disowns him while he is dying. Herod is unique for a villain in that he does have his softer moments and at times seems likeable. Don’t let it fool you, though; at heart he is pure evil. The Ducks are likewise in control of the playoffs so far. Did anyone seriously entertain the notion that the Ducks were in any trouble during that entire series? The Ducks also have their softer moments (I like Scott Niedermayer, and Getzlaf’s goal in Game 2 was pretty sick), but I still really hope they lose. 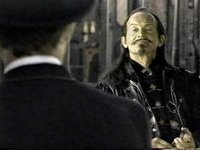 Ace Hanlon was a trickster gunslinger who talked a bigger game than he could back up. He was flashy, but humiliated by Herod in the first round and then shot in the chest. Twice. The Wild are similar in that they have their flashy parts (Gaborik, Demitra), but they really had no chance in the first round. The Ducks didn’t kill them, though; they just severely injured one of them. 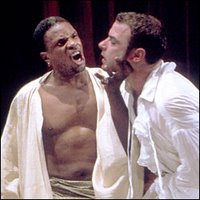 I couldn't find a picture of him, so this is from some movie. Why is he yelling?
Sgt. Clay Cantrell: San Jose Sharks and Townspeople: Me

Cantrell is a former Union soldier hired by the townspeople of Redemption to kill Herod. He is an unsavory character, but he’s the only chance the people have. He fails, however, and Herod responds by increasing the taxes of the townsfolk. The Sharks are similar to Sgt. Cantrell because while I don’t really like them, I’m cheering for them because I think they’d have the best chance at beating the Ducks. So far, though, I’m getting the feeling that they won’t be able to. 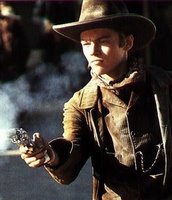 The Kid tore through his part of the bracket, looking almost unstoppable. He managed to wing Herod (his father) when they fought, but took one to the stomach and bled to death. Herod always denied he was The Kid’s father because The Kid was too soft. Likewise, the Wings are a flashy team that so far has looked unstoppable. I suspect that they would lose if they played the Ducks if they play for the same reason that The Kid fell to Herod; they’re just too soft. This also works because The Kid was played by Leonardo DiCaprio, and he’s pretty just like Henrik Zetterberg. 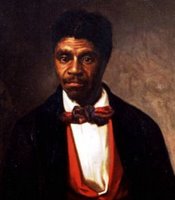 Dred is a local pedophile who rapes the innkeeper’s daughter. He’s a completely vile character and is shot by The Lady in an unofficial duel. Likewise, the Nashville Predators are a gang of (alleged) pedophiles who deserve nothing but contempt. They raped Jonathan Cheechoo’s knee and Steve Bernier’s brain in consecutive games. If they were only shot in a rain-soaked duel by Sharon Stone, they should consider themselves lucky.

Cort was on the other side of the bracket from Herod. He used to be one of Herod’s gang but left when he found God. He’s old and weary of life, but he can still use a gun surprisingly well. I used to hate the Rangers back when they were good, but sort of forgot about them when they started sucking at the turn of the millenium. Now they’re back and surprisingly competitive, even though no one really thought they had much of a chance. I guess you shouldn’t underestimate experience and gumption. Plus, Russell Crowe is well-known for being a dick, and so is Sean Avery, so that works too. 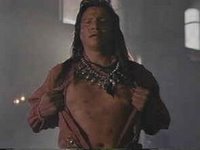 Spotted Horse: Buffalo Sabres
Spotted Horse was a giant Native American dude who said he could not be killed by a white man… right up until Cort shot him in the head. Likewise, the Sabres have been called invincible, but I just don’t see it. They look small and weak defensively. I swear, I feel like I’m taking crazy pills. Does no one think they look beatable but me? 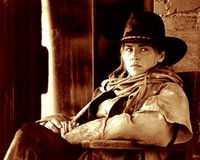 This one was the toughest to find a similarity for. The Lady hated Herod because she had killed her father while trying to free him from a trap set up by Herod (It's complicated). This haunted her up until the tournament, when she finally accepted it and faced Herod. She killed him and freed the town from tyranny. The Senators also have an embarrassing episode in their past (their shameless tanking to get Alexander Daigle in 1993 and general suckitude throughout the 90s), which resulted in years of hardship for them (never getting over the hump the last few years). They seem better now though, like they could really do something in the playoffs. It depends a lot on Ray Emery, but they’re the team that could stand up to the Ducks. (At least if The Quick and the Dead is any indication.)

(Oh, and just so you know, Earl Sleek is Ratsy, the guy who was Herod’s lap dog and was eventually shot by Herod for injuring Cort’s hand and generally being a shitheel.)