San Jose beats Anaheim with a stick, 3-2 shootout win after Selanne called for a width violation

Share All sharing options for: San Jose beats Anaheim with a stick, 3-2 shootout win after Selanne called for a width violation 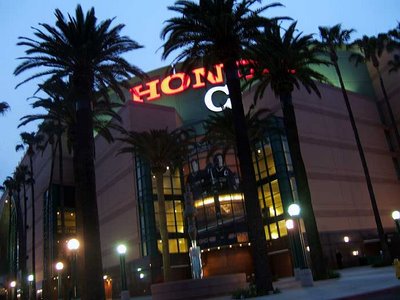 Beautiful exterior of the Honda Center in Anaheim. Inside the fans are right on the ice, stacked high in three levels with a sight line similar to that in San Jose. The boards and glass were worn, surprisingly so, and the condition of the ice was a concern on a very warm day. 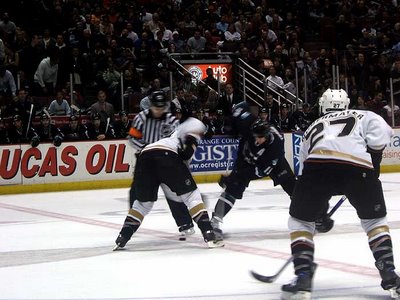 Joe Thornton taking a faceoff in the second period. The Sharks dominated on the draw, winning 35 of 54. Anaheim scored the lone power play goal (Scott Niedermayer) of the game in the first period. 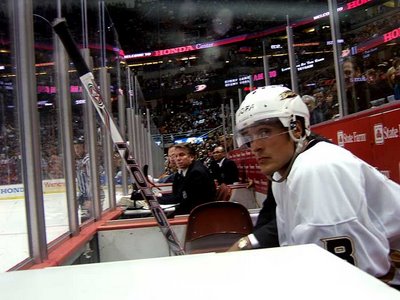 Ron Wilson called for Teemu Selanne's stick to be measured for an illegal (width) at the start of overtime. Craig Rivet had a minute 24 seconds left to serve in a late third period hooking penalty, and the teams would be even up for most of OT. Selanne asked for his stick back at the end of regulation and the referees repeatedly said no.

The Ducks outshot San Jose 6-2 in overtime, and all 6 were solid scoring chances in front of the Sharks net. Evgeni Nabokov came up huge on several point blank saves, often with a number of bodies in front of him. 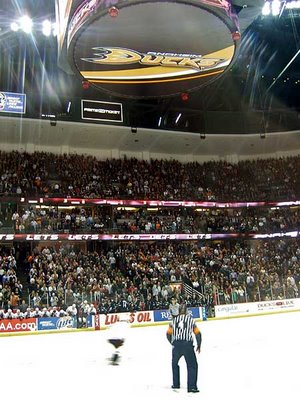 Teemu Selanne lining up his overtime shootout attempt, which missed the net wide. The next Anaheim shooter, Andy McDonald, deked the puck right and then lost it off his stick trying to reverse the direction. Only one player got a shot on net for the home team.

Ryan Getzlaf scored the first goal on the first attempt for Anaheim. Evgeni Nabokov closed his legs early, and Getzlaf fired in an easy goal with no reaction. Jonathan Cheechoo and Ryane Clowe scored 2 shootout goals in 2 attempts for San Jose. Game over, 3-2 win for the Sharks. Anaheim wins the season series, but San Jose wins one for NoCal and gains a huge momentum boost heading into the second season.

[Update] "We had an inkling his stick might be too wide. When you look at it, it's almost the width of a goalie stick." - Ron Wilson